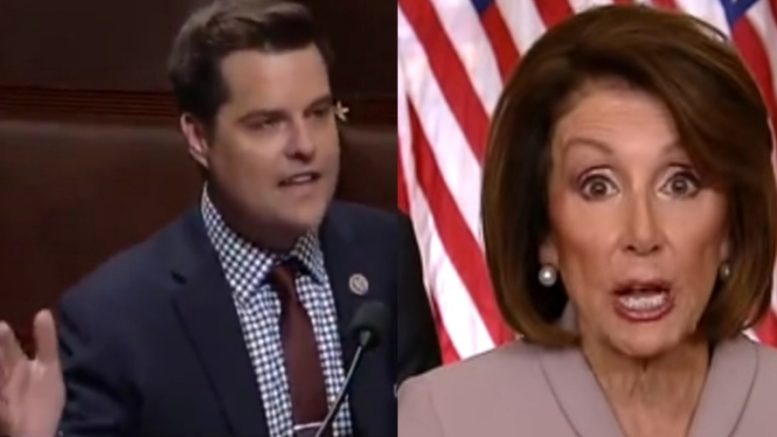 Congressman Matt Gaetz, like many Republicans, is anxious to hammer out a deal with Democrats before the clock winds down to another potential government shutdown.

After a standoff that lasted over a month, Democrats and Republicans recently passed a bill to open the government for up to three weeks while negotiations take place. The hope is that both sides will forge a deal before the three-week deadline hits.

In a speech delivered to Congress, Gaetz was appalled at how much negotiation time is being passed up by representatives with so much at stake.

Gaetz is seen on video saying, “It’s not even 5 o’clock. Two and a half weeks away from a potential government shutdown, and there’s functionally nobody here.”

He then specifically called out Nancy Pelosi.

Gaetz demanded to Speaker Pelosi, “If you’ve got a border security package, put it on the floor!”

Related Article: Sara Carter & Geraldo Team Up To Put The Heat On Schumer & Pelosi Over Their Resistance

He finished off with, “Congress got into work last night, and we’re leaving tomorrow! It’s like we’ve got the French work week around here!” Video Below

Two and a half weeks away from a potential government shutdown…

And there is functionally nobody here. pic.twitter.com/ygnuSLUmG8

In ending, here’s video of Gaetz discussing what he expects to happen if Democrats fail to come to the table:

#AmericaFirst – @RepMattGaetz: President @realDonaldTrump will secure our border. If Congress fails to do its job, he'll do his & make sure a border barrier is built, and we’ve got to have it. It’s just the insiders in DC who benefit from open borders. #MAGA #TrumpTrain #Dobbs pic.twitter.com/b5UUpTNH4I