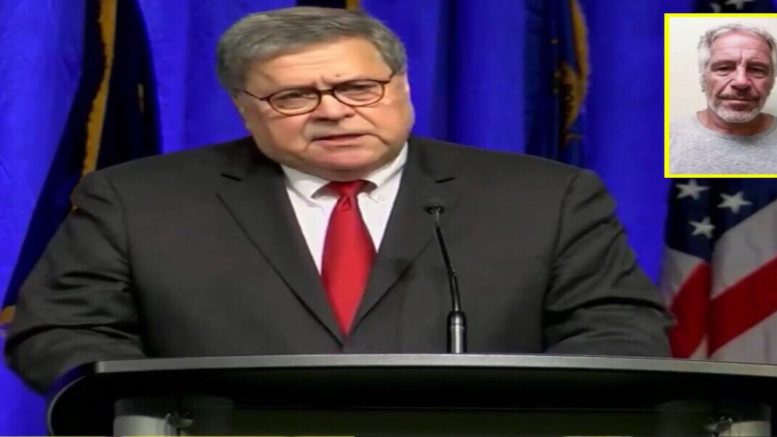 While speaking at the conference, Barr blasted corrections officials and vowed to investigate the “serious irregularities” uncovered at the federal prison in the aftermath of accused sex trafficker Jeffrey Epstein’s apparent suicide.

The Attorney General vowed a comprehensive probe by the FBI and the Justice Department inspector general surrounding the new and disturbing revelations Monday from lawyers and others who say the New York lockup’s failings have been ignored for years.

He also assured that the sex-trafficking case will continue against anyone who conspired with Epstein, and said victims will see justice in the end.

“Most importantly, this case was important to the victims who had the courage to come forward, and deserve the opportunity to confront the accused in the courtroom,” he continued. “I was appalled and indeed the whole department was, and frankly, angry to learn of the MCC’s failure to adequately secure this prisoner. We are now learning of ‘serious irregularities’ at this facility that are deeply concerning and demand a thorough investigation. The FBI and the Office of Inspector General are doing just that. We will get to the bottom of what happened. And there will be accountability.” (Continued Below)

A source familiar with the matter told Fox News on Monday that Epstein’s suicide watch had been lifted recently. Fox News also has learned that according to normal MCC operations, Epstein should have been checked on, physically, every 30 minutes, but apparently was not checked on for “several hours” leading up to his death. A source also told Fox News that Epstein did not have a cellmate on the night of his death, as per Fox News.

Barr added, “Let me assure you this case will continue on against anyone who was complicit with Epstein. Any co-conspirators should not rest easy. The victims deserve justice, and they will get it.” [Emphasized.] (Continued Below)

Epstein, who was accused of sex trafficking with minors, was found unresponsive inside his cell at the Metropolitan Correctional Center in New York City around 6:30 a.m. on Saturday. Life-saving measures were initiated immediately by staff. He was then transported to New York-Presbyterian Lower Manhattan Hospital, where he was declared dead on arrival, officials said, as reported by Fox News.

(Related: With TP As A Prop, Terrence Williams Pokes Holes In The Epstein Suicide Narrative: ‘Conspiracy Theory? No!’)

Rep. Ocasio-Cortez gets Mocked for Dancing to Protestors Chanting ‘AOC has got to go!’