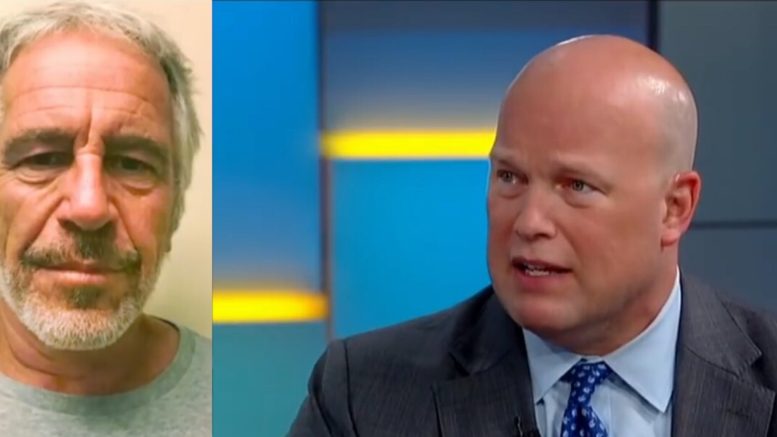 Former acting Attorney General, Matthew Whitaker spoke with “Fox & Friends” Monday where he weighed in on the apparent suicide of Jeffrey Epstein inside a New York City federal prison.

Whitaker believes that “something doesn’t add up” and called for “full transparency” on the events that led up to Epstein’s death.

Fox News reported that according to normal MCC operations, Jeffrey Epstein should have been checked on, physically, every 30 minutes, but apparently was not checked on for “several hours” leading up to his death. A source also told Fox News that Epstein did not have a cellmate on the night of his death.

Responding to Epstein’s death, Matthew Whitaker said that he was “very pleased” that Attorney General William Barr is taking the case “very seriously,” noting that Barr wants to get to the bottom of it.

Related: AG Barr On Epstein’s Death: ‘This Case Will Continue On Against Anyone Who Was Complicit- Any Co-Conspirators Should Not Rest Easy’)

“Nobody does it better than [the Bureau of Prisons], so I was really surprised to see that some of these protocols and procedures – the 30-minute check and the like – were not followed,” said Whitaker. “I think there [are] some serious questions raised here and once we hear the whole answer, we’ll have a lot better picture. Reason and common sense would suggest that someone should have been checking on him based on what happened several weeks before.” (Continued Below)

Whitaker noted that transparency is the key to getting the answers solved for Epstein’s death. “If you don’t give all the facts, essentially in a line by line as to what we looked into, what we found, what we saw, what was violated if anything, the who, what… the facts, then the confidence won’t be there. So we need ultimate transparency in this case,” he said.

He also stressed that Mexican drug lord Joaquin “El Chapo” Guzman was held at the same facility, but Epstein was reportedly not monitored closely enough to prevent his suicide.

“I was surprised to see they could hold [El Chapo] safely without incident and then have one alleged failed attempt at suicide [by Epstein] and now a successful attempt. The questions surrounding this, ‘something doesn’t add up’ and ‘we need full transparency and we need the answers on this,'” Whitaker said. (Video Below)

Whitaker also said to get the answers “you start on the outside and work your way in.” He added that “it’s interesting that the prison has cameras, but not in the cells. There was nobody in the cell with him and I think to some extent it’s going to be what was happening outside of the cell and in the hallways and who was moving around at the time. Those cameras are usually your best fact providers.”

Responding to Attorney General Barr being upset about the case, Whitaker stated, “I”m sure when he got the news, I’m guessing he did not use the best the language because that was if not the most high profile case going on at DOJ, one of the most high profile cases. And you just want to make sure those victims receive the satisfaction and the justice that they deserve. And so, to have it go down the way it went down, you would want the Attorney General outraged and very angry and demanding answers.”

(Related: Kellyanne Conway Responds After Epstein’s Death: ‘The President Wants Everything To Be Investigated’)

Trump: ‘I’ll be Making a Statement on the Never Ending Witch Hunt Tonight at Mar-a-Lago, 8:30 P.M.’