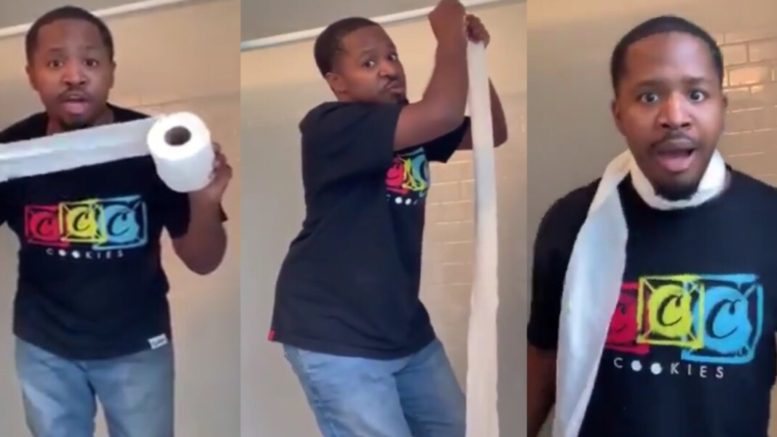 Social media sensation and comedian, Terrence Williams, has been on a roll ever since accused sex trafficker Jeffrey Epstein reportedly committed suicide.

As more details surrounding the death of Epstein come to light, Terrence Williams doesn’t think any of it is adding up right. Terrence, along with many others, including a former inmate, can not fathom how suicide by hanging, while on suicide watch was even possible, given the facts that have been presented thus far.

Terrence Williams took to Twitter on Monday where he reenacted a person trying to hang oneself with “toilet paper” and exhibited how it’s impossible.

He wrote along with his video, “JEFFERY EPSTEIN SUICIDE IS SHADY. All He could have in his cell was Tissue. HERE is my LIVE DEMONSTRATION- a ROLL of TISSUE never killed ANYONE.”

“First things first, I am ‘not’ a conspiracy theorist. I’m just another man in this country trying to find the pieces to the puzzle,” Terrence said as he has faced backlash for connecting Epstein’s death with the Clintons. “Who [doesn’t] like solving puzzles? I’ve been solving puzzles all my life, ever since I was 2 years old. Come on now! I’m just trying to figure out how Jeffery committed suicide on a 24/7 suicide watch with tissue [paper] because this is all they give you suicide watch.”

Terrence proceeded to tie toilet paper on what appeared to be a shower rod in a knot, then he demonstrated how one could not commit suicide with toilet paper. “This is the thickest tissue you can buy. It’s that $5 dollar tissue. Let’s see here. This is tissue, you cannot kill yourself with tissue, but I’ll show you since nobody believes me,” he said. (Continued Below)

Terrence said he was only doing it for a demonstration and advised his fans, “Do not try this at home. This is just to show ya’ll that [Epstein] could not have hung himself with tissue in prison, okay?”

“I’m alive!” Terrence said as he laughed. “I’m alive, you know why? Because you cannot kill yourself with tissue.” (Video Below)

All He could have in his cell was Tissue

RT to show the world its impossible!

(Related: With TP As A Prop, Terrence Williams Pokes Holes In The Epstein Suicide Narrative: ‘Conspiracy Theory? No!’)