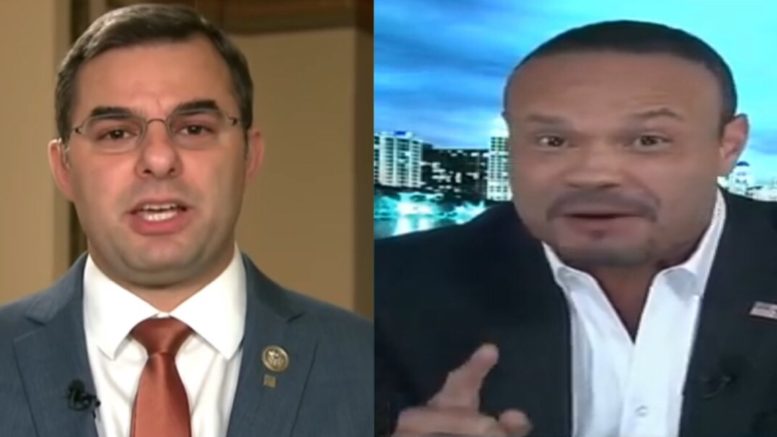 Bongino punched back and explained why Amash should leave the Republican Party.

RINO Justin Amash (R-MI), came out of nowhere and took to Twitter Friday in a 13 part series of tweets attacking President Trump and Attorney General William Barr. Amash is now the first Republican to stab Trump in the back by announcing that he’s in favor of impeaching the President after the release of the Mueller report.

(Related: Trump & McCarthy RIP Rep. Amash After His Call For Impeachment: ‘Justin Is A Loser Who Sadly Plays Right Into Our Opponent’s Hands!’)

“Contrary to Barr’s portrayal, Mueller’s report reveals that President Trump engaged in specific actions and a pattern of behavior that meet the threshold for impeachment,” Amash wrote in one of a series of tweets.

President Trump fired back at Amash calling him a “loser” and a “lightweight” who’s “helping Democrats.” (Continued Below)

Dan Bongino admitted that he had always been a fan of Amash’s strong libertarian platform, but there is “absolutely nothing libertarian” about claiming President Trump should be impeached for “fictitious” offenses.

“Justin Amash should leave the Republican Party immediately, stat, ASAP! And listen, that gives me absolutely no joy in saying that. I thought he was one of the more principled guys in Congress. Turns out he is the biggest phony up there right now,” he suggested.

Bongino speculated that Amash may have “bigger aspirations” and is attempting to generate headlines with his comments. “Either he doesn’t understand the case, the totality of the case at all, or he’s doing something to get his name in the media.” (Continued Below)

Bongino went on to say, “There is nothing Libertarian claiming an innocent man, President Trump, should be impeached and thrown out of office for fictitious crimes that didn’t happen. It’s outrageous he would even claim that.”

He pointed out that “Libertarians” are supposed to support “liberties given in the Bill of Rights” and then, Bongino laid down the hammer.

“Trump and his team… we absolutely know they were spied on. We know their fourth amendment rights, we know their rights were thrown out the window with trash. And you’re a Libertarian supporting further criminal action down the line against the President of the United States? It doesn’t make any sense. Is he unaware of this case that a crime was fabricated out of thin air, out of weaponized police state assets that went after the President and his team? Did he miss that whole story?” Bongino asked. [Emphasized]

He asked, “What is Amash talking about? Did he miss this entire case and just jump in at the end and send out a random tweet because he was bored? It’s really pathetic.” (Video Below)

(Related: Gowdy Drops A Dossier MOAB Exposing A Fifth Possible Way It Was Used To Spy: ‘Brennan, Clapper, Comey Know If It Was Used’)

In His Debut Back To Social Media, Kanye Drops A MAGA MOAB On All Of His Fans: ‘I’m Performing With My [Bleep]-ing Hat!’