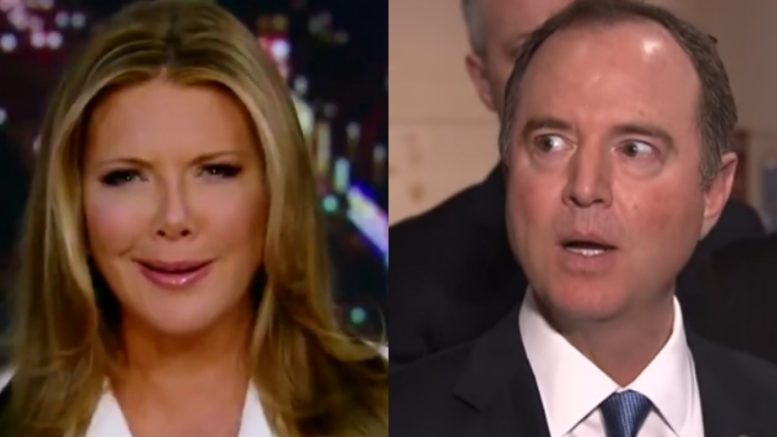 Trish Regan called Adam Schiff’s bluff during one of her recent segments on Fox News.

Schiff is still pushing the notion that President Trump colluded with Russia during the 2016 campaign. He also says there is evidence to prove it, despite the findings of Special Counsel Mueller’s two-year investigation that turned up no collusion.

Regan played a recent clip of Schiff saying, “As I’ve said, there’s plenty of evidence of collusion and corrupt co-mingling of work between the Trump campaign and the Russians.”

The Fox host cut to the chase and demanded Schiff to either “put up or bow out”. Regan said, “I don’t see a problem with you showing us what you have, Congressman, the American public.”

She added, “That so-called evidence that you’re bragging about especially when Adam Schiff’s fellow Democrat, Jerry Nadler, is calling for the entire Mueller Report to he released.”

Regan then claimed that what we are seeing out of Schiff is actually “the height of selfishness.” She said, “Schiff cares not for the well-being of this country but rather his own political prospects and his party, for that matter.” Video Below

She then questioned if the evidence Schiff is talking about is the same “bad information” that former CIA Director John Brennan said he had gotten.

Regan stated that if Schiff and others “pulled head out of their you know what,” they could embrace many of the positives that have come from President Trump, including “immigration reform, trade reform and more economic prosperity.”

Finally, Trish voiced her belief that “political animals” like Schiff are not capable of making America a better place because they are too caught up in their of selfishness. She finished by saying, “Mr. Schiff, show us that evidence you’re talking about. Put your cards on the table, sir or resign!” Video Below