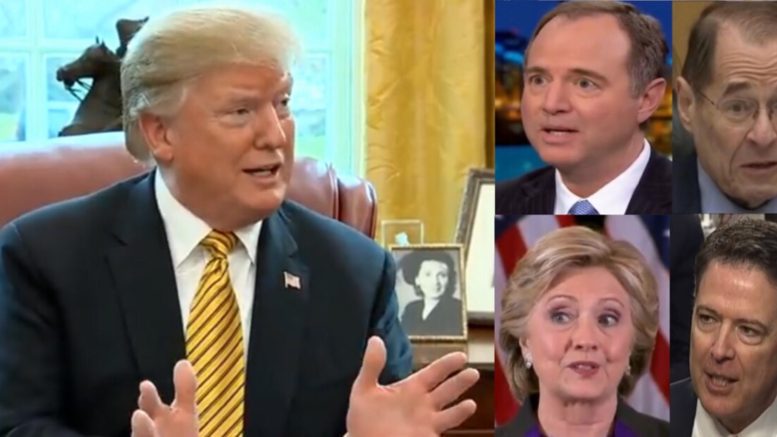 President Trump took to Twitter Saturday morning where he pushed back at the Russia collusion conspiracies and the angry Democrats who continue to peddle the narratives.

In a series of tweets, the President set the record straight calling the Mueller probe a “Con Job” along with demanding that law enforcement must find out “how it started.”

The Commander in Chief explained that that he has not seen the Mueller report yet and has only been briefed on the summary written by Attorney General William Barr. However, he said that he is well within his rights to look at the full report by special counsel Robert Muller.

He began, by quoting former Secret Service agent Dan Bongino and wrote, “Collusion was a Hoax from day one. @dbongino @foxandfriends”

“I have not read the Mueller Report yet, even though I have every right to do so. Only know the conclusions, and on the big one, No Collusion. Likewise, recommendations made to our great A.G. who found No Obstruction. 13 Angry Trump hating Dems (later brought to 18) given two years and $30 million, and they found No Collusion, No Obstruction. But the Democrats, no matter what we give them, will NEVER be satisfied. A total waste of time.” Trump continued.

The President said that the American people are tired of hearing about the Russia collusion allegations, from which Attorney General Bill Barr’s summary exonerates Trump and his associates, and it’s time for Democrats and his opponents to move on. As @FrankLuntz has just stated, “Enough, America has had enough. What have you accomplished. Public is fed up.” (Continued Below)

House Judiciary Committee Chairman Jerry Nadler (D-NY) and House Intelligence Committee Chairman Adam Schiff (D-CA) continued their grandstanding efforts, in which they called for the full Mueller report to be sent to Congress and unredacted.

(Related: Giuliani Reacts As Dems Now Speculate AG Barr Committed Obstruction: ‘How The Heck Did It Get Obstructed?’)

Since the release of Barr’s summary, Democrats have insisted that any conclusions drawn by the attorney general are not sufficient to answer the allegations of Russia collusion made against Trump and his associates. (Continued Below)

President Trump also called for law enforcement to investigate how the Russia hoax started, noting it was “con job.”

He wrote, “So, let’s get this straight! There was No Collusion and in fact the Phony Dossier was a Con Job that was paid for by Crooked Hillary and the DNC. So the 13 Angry Democrats were investigating an event that never happened and that was in fact a made up Fraud.”

He asked, “I just fought back against something I knew never existed, Collusion with Russia (so ridiculous!) – No Obstruction. This Russia Hoax must never happen to another President, and Law Enforcement must find out, HOW DID IT START?”

We leave you with Laura Ingraham sounding off: