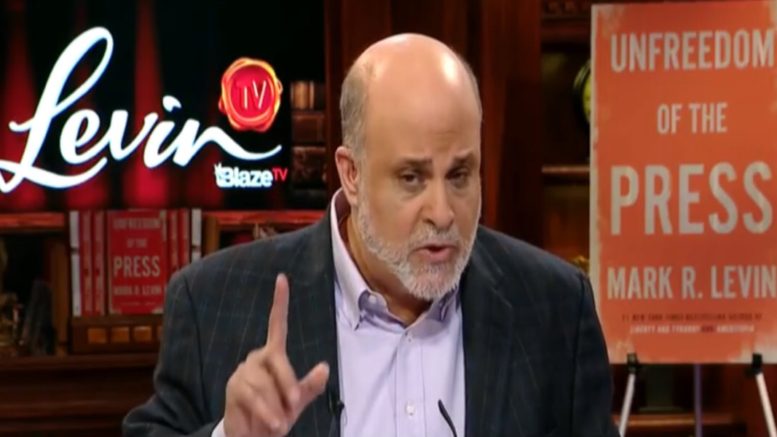 Mark Levin, “the great one”, spoke with host Sean Hannity on Fox News Thursday where he sounded off on the “bogus” impeachment being pushed through by a “rogue House Democrat leadership”, and called for the next Democrat president to be “impeached”.

“First of all, let’s take a look at the committee chairmen and the Speaker. You have Pelosi, Schiff, and Nadler. What do they have in common? A lot of things. They talk about the rule of law, they come from sanctuary cities that nullify federal law and they support that. They obstruct ICE and law enforcement. They reject our immigration laws and now they’re talking about the rule of law? They don’t believe in the rule of law,” Mark Levin said.

“The Constitution is the law of the land, not any of these potentates that run these committees, and not Nancy Pelosi,” he added.

Levin explained that it is the Commander in Chief’s duty to uphold the Constitution, not a “rouge House when the Democrats are in control.”

“First of all, obstruction of Congress they said, right? Has the Senate done anything yet? So how is it obstruction of Congress? It’s obstruction of a rogue faction of radical Democrats in the House of Representatives. Once they won the majority, they immediately ran for impeachment. The president of the United States has no obligation to them,” Levin insisted. (Continued Below)

Then, he recommended: “The next Democrat president of the United States must be impeached“, adding, “Not to get even, not because we’re at their low level, because the Republicans can’t live under one Constitution when the Democrats live under another Constitution.” [Ephasis added].

“It’s the only way we’re gonna stop them,” he said. “One party can’t be allowed to abuse the Constitution, yet wave it around, while the other party sits there and takes it. The Democrat Party must be slammed down. The next Democrat president, if they vote for impeachment against President Donald Trump, must be impeached. And we have the blueprint, it’s the Pelosi project.” [Ephasis added]. (Video Below)

Levin noted that Pelosi said on Thursday: “We’ve been at this for 22 months, for two years. What do you mean we’re being fast here?”

“We have the plan: endless unconstitutional subpoenas, no resort to judicial review, no due process, accusers are protected from scrutiny, phone calls of foreign leaders must be released, the president’s closest advisors must testify, tax returns, business records, bank records, business associates, all subject to Congressional access, and demand the appointment of a special counsel,” he listed off.

“That’s the Pelosi project. It must become the Republican project when there is a Democrat president,” Levin suggested.

“Donald Trump is upholding the Constitution. Donald Trump is the victim. It is the members of the House of Representatives, the Democrats– they’re the ones who need to be impeached!” he proclaimed.

(Related: Levin Warns GOP Senators To “Stand Up” & Stop Pelosi’s “Poison” From Spreading Around The Country)

Harmeet Dhillon On Impeachment: “It’s Time To Go To The Mattresses, This Is War”