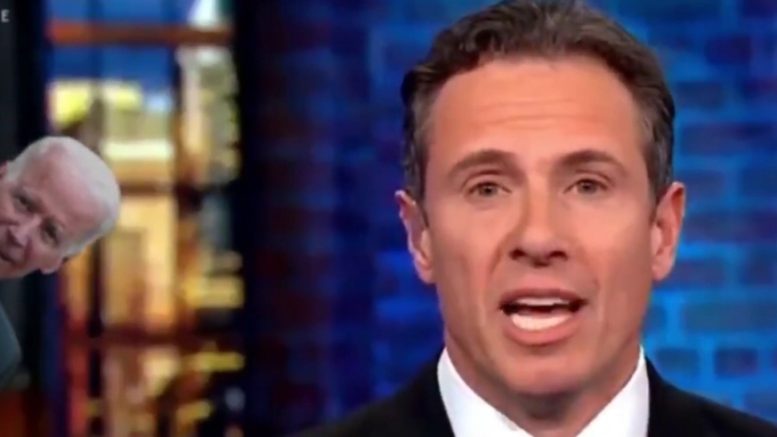 President Trump took to Twitter Thursday where he trolled Joe Biden by tweeting a “doctored video” of the former vice president after a series of misconduct allegations that have been thrown his way.

Biden posted a video on Twitter Wednesday in which he acknowledged his physical displays of affection and that it may have made some women uncomfortable. In it, he also promised to be “much more mindful” of respecting personal space.

After President Trump tweeted the “doctored video” that has now since gone viral, the internet has been having fun creating other videos and memes in relation to Biden. However, the left wing media apparently doesn’t know what humor is, and they have acted as if they are morally offended.

One in particular, Chris Cuomo from CNN, didn’t find the the joke funny at all.

“The high road as we know– this President is looking for a detour down into the dirt.” He said of President’s Trump’s tweet mocking Joe Biden. “And today, he was taunting the Vice President with a message ‘Welcome Back Joe!”

Cuomo went on to say that the President tweeted a “doctored video” that [was] “pinned” to his [Twitter] feed–that has ‘special effects’ with the former VP to look like a predator.” He added, “But, that’s this POTUS. No shame in his game.” (Continued Below)

Carpe Donktum, the creator of the “doctored video”, took note of Cuomo complaining about the “special effects” and he made a video of Cuomo and Biden next. He also wrote, “Hey Chris Cuomo, I heard you disapprove of special effects. Let’s get after it.”

The video from Carpe Donktum displays Biden lurking in the background while Cuomo is talking on set of CNN, and then Biden places his hands on his Cuomo’s shoulders and smells him. (Videos Below)

Later after the video surfaced, Cuomo tweeted to Carpe Donktum, “Bring it on, brother. I called out potus’ shameless mocking. If Biden and he enter a character contest – he should start packing now.”

Wait, is it possible this video was DOCTORED??! #HeavenForbid https://t.co/PtReM9F56a

Bring it on, brother. I called out potus’ shameless mocking. If Biden and he enter a character contest – he should start packing now. https://t.co/uziZlwhOUw