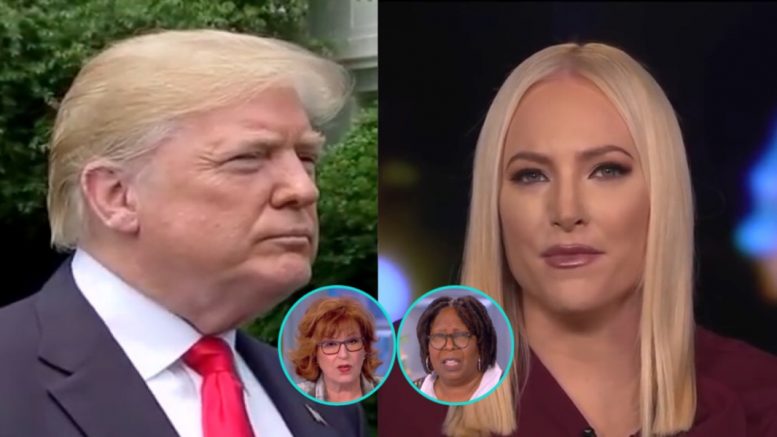 45th President Donald J. Trump issued a statement Friday via email from his “Save America” PAC following Meghan McCain’s departure from ABC’s “The View”, recommending she “fight the Communists instead of explaining how they beat her, hurt her, and made her ‘physically ill'”.

McCain told Fox News’ Sean Hannity on Wednesday, “My four years in an anthropological experiment at left-wing media had come to an end,” adding in part, “Being a conservative woman in mainstream media is deeply threatening. Being a woman who can hold her own on a show like that proved to be ultimately threatening, so it became more and more personal”.

“Isn’t it funny that Meghan McCain, who has always been a bully and basically a lowlife, is now complaining that it was she who was bullied by the Slobs and Radical Left maniacs of ‘The View'”, 45th President Donald Trump wrote in a statement on Friday, referring to remarks she made during an appearance on “Watch What Happens Live With Andy Cohen”, which aired on Thursday.

“At the request of many of her representatives, I made it possible for her father to have the world’s longest funeral, designed and orchestrated by him, even though I was never, to put it mildly, a fan,” Trump said, amid McCain’s new book, Bad Republican, iwhich she criticized Ivanka Trump and her husband, Jared Kushner, for attending her father John McCain’s funeral in 2018.

Meghan McCain referred to the 45th President’s daughter and son-in-law as “funeral crashers”, and further addressed their presence at the service during “Watch What Happens Live With Andy Cohen”, saying, “They should never have come. They had no business being there. I remember seeing them, and seeing her specifically. They had no god***n business being there, and it’s something that still angers me, clearly.”

Asked by host Andy Cohen what motivated them to attend the funeral, McCain replied, “I’ve heard lots of different stories. One of my dad’s old advisors told me that it was just like an event that they wanted to go to, because his funeral at the National Cathedral kind of ended up being this enormous moment. I was told that Lindsey Graham invited him. I have been told many different things from many different people.” Continued Below

Trump went on to say in this email statement, “In his own very special way, he was a RINO’s RINO. Despite his fighting against me, I won Arizona by a lot in 2016 and won Arizona by even more in 2020—unfortunately the vote counters in 2020 were far more important than the candidate (See the determinative Report issued Wednesday by the Arizona Auditors!).”

The 45th President was referencing an 11 page rebuttal to Maricopa County over the forensic audit findings written by Cyber Ninjas.

“I have since found out that McCain, who was close to last in his class at Annapolis, sent the fake and totally discredited scam Dossier to the FBI, hoping to stop the ‘Trump Train'”, Trump said. Continued Below

“In any event, Meghan should fight the Communists instead of explaining how they beat her, hurt her, and made her ‘physically ill.’ She should fight back against the Losers of The View the way she fights against very good and well-meaning Republicans, and she would do herself a world of good!” the 45th President advised. 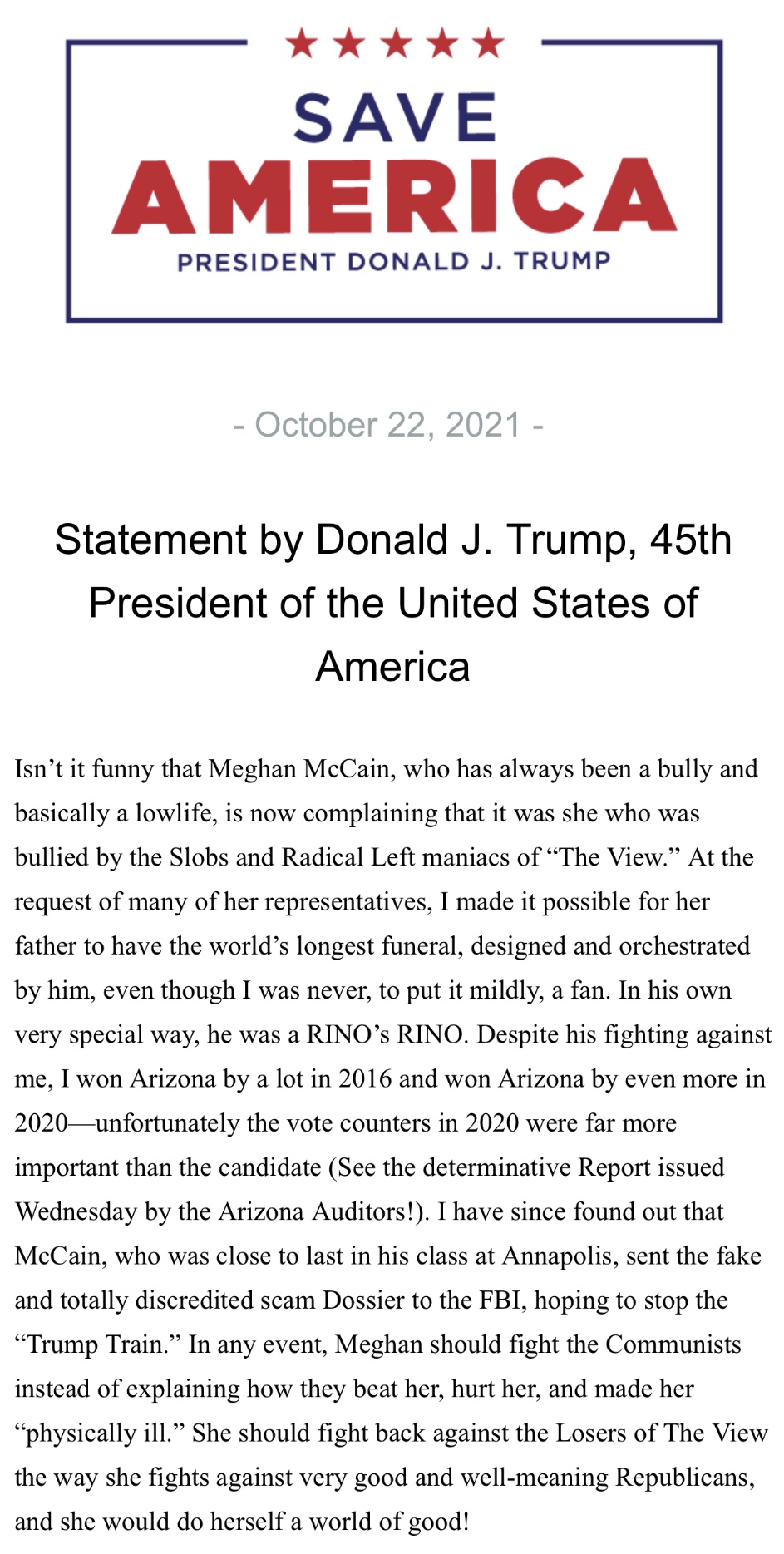 A federal judge ruled in favor of BuzzFeed on Dec. 19 after the news website was sued for defamation following its publication of the so-called Steele dossier on Jan. 10, 2017.

Contained within this ruling were a significant number of details related to the dossier and its dissemination, including some previously unknown information relating to activities on the part of David Kramer, a longtime associate of the late Sen. John McCain (R-Ariz.), along with the disclosure of a number of individuals who received copies of Steele’s final report.

The Steele dossier is actually a collection of 17 reports that former MI6 agent Christopher Steele wrote between June 20, 2016, and Dec. 13, 2016. Steele’s final memo is also known as Report 166.

‘Having The Courage To Do The Right Thing!’: Trump Declares Of PA Court Who Ruled Expansive Mail-In Voting Law Unconstitutional