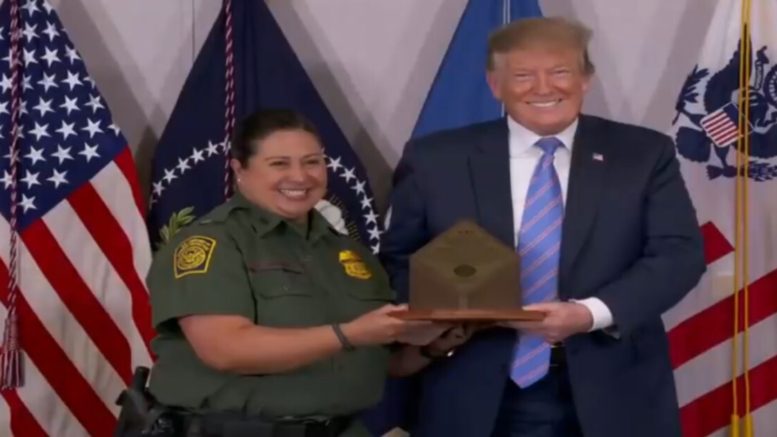 President Trump visited Calexico, California on Friday to meet with border control and see a new portion “The Wall” being built.

While there, he participated in a round-table discussion on immigration and border security. During the event, the President was presented with a memorable gift from the Border Patrol chief, in return for his dedication to solving the border crisis.

Calexico Border Patrol Chief, Gloria Chavez, happily presented President Trump with a piece of border wall in return for his help on Friday.

Chavez said to the Commander in Chief, “I did ask the team of agents… they did not want you to leave from here, because we know your time is precious, [but] they wanted to present you with a nice memento and appreciation of all the support you have given us.”

The piece of the wall presented to President Trump, in the form of a plated-plaque read, “#45, Mr. President, the agents and employees of the U.S. border patrol, El Centro Sector, are the tip of the spear proudly defending America’s borders. In recognition of your commitment and unwavering support for the men and women on the front lines and the border security mission of the United States, we would like to present you with this piece of the first 30 ft border wall installed along the United States border with Mexico. Honor first, United States Border Patrol, El Centro Sector, April 5, 2019.

President Trump was all smiles. He held up the gift and expressed, “That’s a heavy piece of wall!” (Videos Below)

The Commander in Chief while speaking during the meeting also said, “We are full.”

“Sorry, turn around!” The President declared. (Videos Below)

🚨Happening Now:
President @realDonaldTrump at the Southern Border with the great men and women who protect our country 24/7/365! THANK YOU!!! pic.twitter.com/QpKThTWwEZ