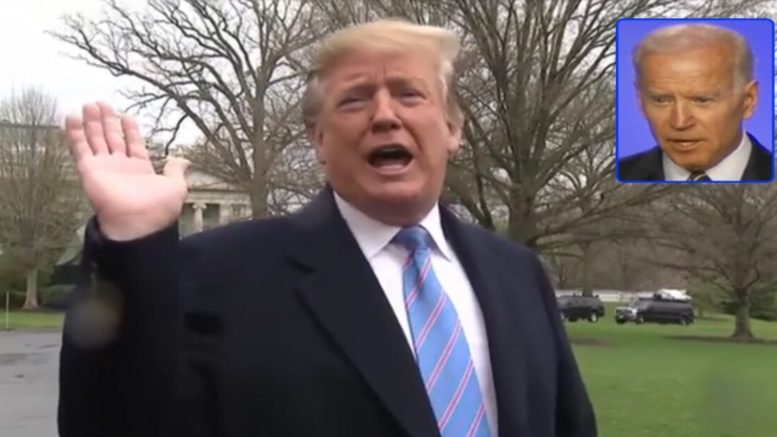 Before departing to Calexico, California to see a new part of the Wall being built, President Trump spoke briefly with the press where he answered a few questions.

The President said Friday he will skip the 2019 White House Correspondents Dinner for the third year in a row, and he also said he would not be worried if former Vice President, Joe Biden, decides to run against him in the 2020 presidential election.

While answering questions, President Trump said he doesn’t see Joe Biden as a threat, adding that he thinks Biden would only hurt himself.

The Commander in Chief also said he will skip the 2019 White House Correspondents Dinner for the third year in a row and hold a political rally instead. (Continued Below)

“The the dinner is so boring and so negative that we’re going to hold a very positive rally instead,” Trump said. “The correspondents’ dinner is too negative. I like positive things.”

Trump has skipped the annual dinner every year of his presidency, which was particularly mired in controversy in 2018 after comedienne Michelle Wolff made several jokes mocking White House press secretary Sarah Huckabee Sanders. (Continued Below)

The President also tweeted, “The press is doing everything within their power to fight the magnificence of the phrase, MAKE AMERICA GREAT AGAIN! They can’t stand the fact that this Administration has done more than virtually any other Administration in its first 2yrs. They are truly the ENEMY OF THE PEOPLE!”

He added, “Will soon be landing in Calexico, California to look at a portion of the new WALL being built on our Southern Border. Within two years we will have close to 400 miles built or under construction & keeping our Country SAFE – not easy when the Dems are always fighting to stop you!”