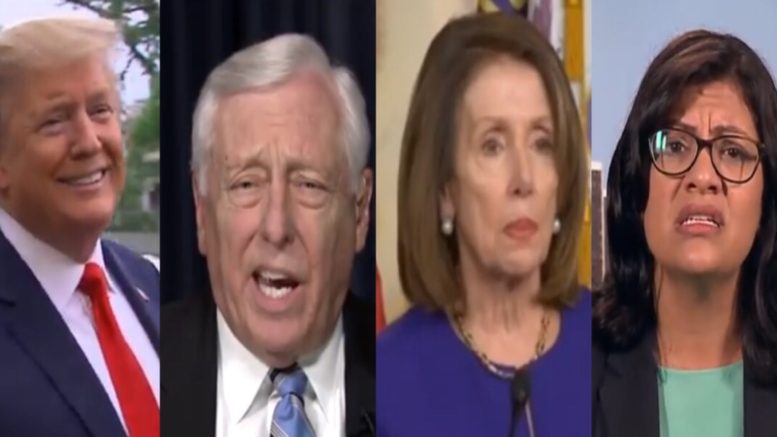 On Friday, Rep. Rashida Tlaib (D-MI), made controversial anti-Semitic comments during a podcast that ignited many House Republican leaders to call on House Speaker Nancy Pelosi (D-CA) to take action.

On Monday, President Trump also broke his silence on Tlaib’s remarks and accused her of ‘tremendous hatred’.

As Fox News reported, Tlaib, the first Palestinian-American woman to be elected to Congress, made the comments while discussing the conflict between Israel and the Palestinians during an appearance on the Yahoo News podcast “Skullduggery.”

“There’s always kind of a calming feeling, I tell folks, when I think of the Holocaust, and the tragedy of the Holocaust, and the fact that it was my ancestors– Palestinians– who lost their land and some lost their lives, their livelihood, their human dignity, their existence in many ways, have been wiped out, and some people’s passports,” Tlaib said Friday on the podcast.

“And, just all of it was in the name of trying to create a safe haven for Jews, post-the Holocaust, post-the tragedy and the horrific persecution of Jews across the world at that time. And, I love the fact that it was my ancestors that provided that, right, in many ways, but they did it in a way that took their human dignity away and it was forced on them,” she said.

Tlaib’s use of the phrase “calming feeling” in reference to the aftermath of the Holocaust is what has drawn backlash. (Continued Below)

President Trump responded on Twitter Monday writing, “Democrat Rep. Tlaib is being slammed for her horrible and highly insensitive statement on the Holocaust. She obviously has tremendous hatred of Israel and the Jewish people. Can you imagine what would happen if I ever said what she said, and says?”

However, House Speaker Nancy Pelosi (D-CA) has denounced GOP criticism of Tlaib, where she joined Majority Leader Steny Hoyer (D-MD), who on Monday called on Republicans to apologize.

Pelosi wrote on Twiter, “Republicans’ desperate attempts to smear @RepRashida & misrepresent her comments are outrageous. President @realDonaldTrump & House GOP should apologize to Rep. Tlaib & the American people for their gross misrepresentations.” (Continued Below)

Hoyer said the comments were taken out of context and tweeted, “If you read Rep. @RashidaTlaib’s comments, it is clear that President Trump and Congressional Republicans are taking them out of context. They must stop, and they owe her an apology.”

If you read Rep. @RashidaTlaib’s comments, it is clear that President Trump and Congressional Republicans are taking them out of context. They must stop, and they owe her an apology.

On the contrary, you know it’s bad when CNN fact checks their own.

Analyst Aaron David Miller and CNN’s John King fact checked Democrat Rep. Rashida Tlaib’s comments on Israel that she made while on the “Skullduggery” podcast.

“Palestinians lost land in the creation of Israel, but she ignored the fact that Palestinian leaders at the time allied themselves with Hitler and the total war is now the Arab world reacted to the declaration of Israeli independence, ” King said.

“I think there ought to be a ban on the deployment or employment of the Holocaust imagery and metaphor in Washington politics. Every time it’s used and deployed and has been, by Republicans, Democrats, it’s wrong,” Miller said.

“She has her history wrong, I mean, on two points,” Miller added. “Number one, it’s an arguable proposition even had there been no holocaust. Most of the institutions of the current state of Israel were in place before Hitler started killing Jews. So the Holocaust added urgency and international support, but I suspect with or without it, the state of Israel would have come into being.”

Tlaib also responded to an article from CNN on Monday that she claimed was “hate mongering” from a headline on a story about her Holocaust comments. “I guess it’s all about the clicks and not the truth. Another misleading & disappointing headline that just feeds into the hate mongering,” she wrote on Twitter.  (Video Below)

I guess it's all about the clicks and not the truth. Another misleading & disappointing headline that just feeds into the hate mongering. https://t.co/EkHM9MrOw5