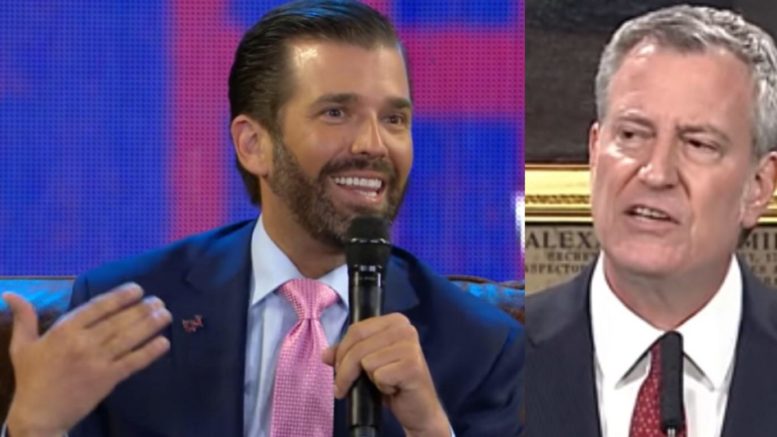 On Thursday, Mayor Bill de Blasio entered the 2020 presidential race, becoming the 23rd Democrat to join the packed field of radicals to try and “take out President Trump”.

The termed-out politician, known for his habitual tardiness, finally decided to run after five months of toying with a White House bid, per The New Post.

The beginning of de Blasio’s video displays himself comfortably riding around the city in the back of an SUV and saying, “Good thing about New Yorkers is they look the same whether they’re really pissed off at you or they like you.”

Later into his video as the White House flashes on the screen to dramatic music, de Blasio pivots while vowing to fight President Trump head-on.

“Don’t back down in the face of the bully– take him on,” he says. “As president, I will take on the wealthy, I will take on the big corporations, I will not rest until this government serves working people. Donald Trump must be stopped. I’ve beaten him before and I’ll do it again.” (Continued Below)

However, Donald Trump Jr. stepped up to the plate where he launched a fresh attack toward de Blasio and exposed proof of his weak leadership in serving as Mayor of New York City.

In a video posted to Twitter, Don Jr. drove around filming an area where homeless people have set up tents and living on the streets in New York City– as de Blasio zips around flashing his fortune. The video also appears to show the streets dirty, covered in trash, and left behind with no cares.

Along with his post, Don Jr. wrote, “Rather than do a PR stunt “run” for President (we all know it’s going nowhere) maybe @NYCMayor should clean up his backyard first. This video from this morning should tell you all you need to know about his “leadership.” What a clown show!!!” (Continued Below)

Rather than do a PR stunt “run” for President (we all know it’s going nowhere) maybe @NYCMayor should clean up his backyard first. This video from this morning should tell you all you need to know about his “leadership.” What a clown show!!! pic.twitter.com/E9kTUQXfTR

de Blasio talks a big game while hundreds of people suffer outside. Why isn’t he trying to do something about the problem and helping the needy? Hats off to Don Jr. for exposing more hypocrisy of the left.

President Trump also fired off calling de Blasio a “joke” and wrote, “The Dems are getting another beauty to join their group. Bill de Blasio of NYC, considered the worst mayor in the U.S., will supposedly be making an announcement for president today. He is a JOKE, but if you like high taxes & crime, he’s your man. NYC HATES HIM!

I’m just here for the ratio🤣🤣🤣

And Lastly, we leave you with a post from Eric Trump, who also took swipes, noting that the New York City Mayor has never created a job, the local police can’t stand him and said that crime is up. He further pointed out the homelessness and the dirty streets.

Spare me? First you have never created a job in your life. Second, our great city has gone to shit under your leadership. Crime is up, the men & women of the NYPD detest you, homelessness is rampant, our streets are dirty and people are leaving our city in record numbers. https://t.co/3Fn1glQJEa