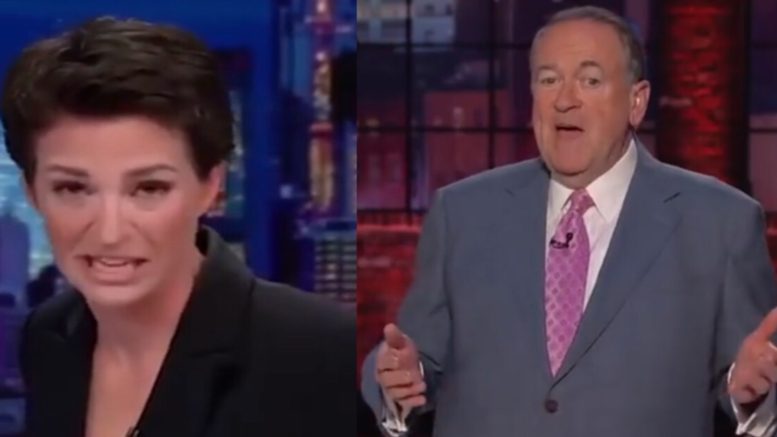 On Wednesday, Huckabee took to Twitter and slammed MSNBC’s Rachel Maddow after finding out how much she is racking in.

While Rachel Maddow is still holding on to her shattered narrative of “Russian collusion,” Mike Huckabee pushed back at the liberal host and accused her of “delivering garbage” to viewers for a hefty fee.

He wrote on Twitter, “Just heard MSNBC pays Rachel Maddow $7 mil a year. The average salary for a garbage truck driver is $40,000.”

Then he asked, “Why is delivering garbage worth 175 times more than hauling it away?”

Maddow’s salary, according to a 2016 Observer report, was indeed a whopping $7 million per year. (Continued Below)

However, as one of the mainstream media’s most impassioned pushers of the Trump/Russia conspiracy theory, Maddow has seen her ratings nosedive after Special Counsel Robert Mueller’s report cleared President Donald Trump of colluding with Russia to win the 2016 election, reported RT.

(Related: Huckabee Issues Schiff A Message On His ‘Evidence’ Of Collusion: ‘Show Up With A Box Full Of It, Or Shut The Heck Up’)

After two years of non-stop “bombshells” and Russian “revelations,” Maddow seems to have had a hard time adjusting to life post-Mueller. The MSNBC host continued to press for more evidence of collusion, and to make outright false claims involving a Justice Department cover-up, per RT.

We leave you with some more wise words from Mike Huckabee:

(Related: Mike Huckabee Points Out What He Believes Was Trump’s Biggest Win In 2018)