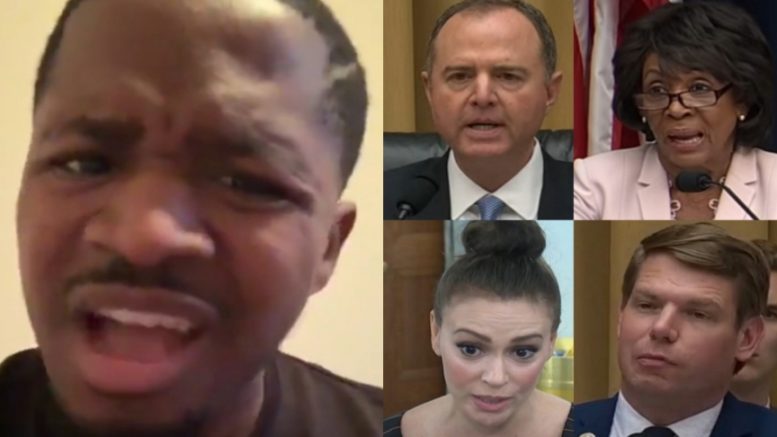 Terrence Williams gave his two cents and then some in wake of the two mass shootings that occurred over the weekend.

Like millions of other Americans, Terrence was devastated upon hearing the news of both the El Paso and Dayton shootings that left 29 people dead and dozens of others injured.

But what bothered him even more were the politics that were being played right after the two tragedies took place.

Terrence didn’t want to comment on either tragedy, however he felt he had to because he refuses “to sit back and let people point the finger at others.”

“Stop making this about politics!” Willams emphasized. “Come on ya’ll! Ya’ll know better than that! Stop pointing at other people! That’s downright wrong to blame this on other people! You don’t blame anybody but the person who pulled the trigger! Okay?! Stop blaming this on President Trump — he didn’t pull that trigger!”

He then slammed those who are blaming the shootings on every conservative and Republican. “Nobody pulled their trigger but them two monsters, okay?!” Terrence declared. Video Below

Terrence then targeted leftists who are calling on President Trump to now take away every gun. “That’s not gonna happen! It’s a violation of the Second Amendment.”

“Gun control is not gonna stop people from committing monstrous acts, at all,” he continued as he used Chicago as an example.

“Over 1500 people were shot in Chicago this year. You heard me — 1500. Over 300 were murdered — shot and killed. Now where was all the gun control talk then? Their lives mattered too! Just like the people in El Paso and Dayton — it’s no different,” Terrence concluded. Video Below

#TrumpsTerrorists Trending? This has nothing to do with the President

We leave you with some examples of those who are playing poltics with the mass shootings and blaming Republicans and President Trump for them.

The ugly truth is this:

White supremacist terrorism is a real and present danger.

When the President and other leaders use racist or dehumanizing language to describe immigrants and Muslims as invaders, angry and isolated men with guns are listening.

THIRD MASS SHOOTING THIS WEEK. BETWEEN 15-20 SHOT IN TODAY’S SHOOTING AND MCCONNELL WON’T BRING #HR8 UP FOR A VOTE.

Tell me again how the @GOP is “pro-life” when they won’t vote for a bill-that already passed the house-which would make the country safer from gun violence. #NoRA

Most countries have violent video games & films, persons w/ mental health illness, and extemists. But no country has the mass shooting carnage of America. What makes us so different? Unrestricted weaponry. Time to ban and buy back every assault weapon in America. #ElPasoShooting

Enough is enough. America, when are you going to demand action on guns? Another senseless mass killing by a young white nationalist. Trump, you cannot escape accepting blame for these escalating killings in our country that are motivated by your race baiting!