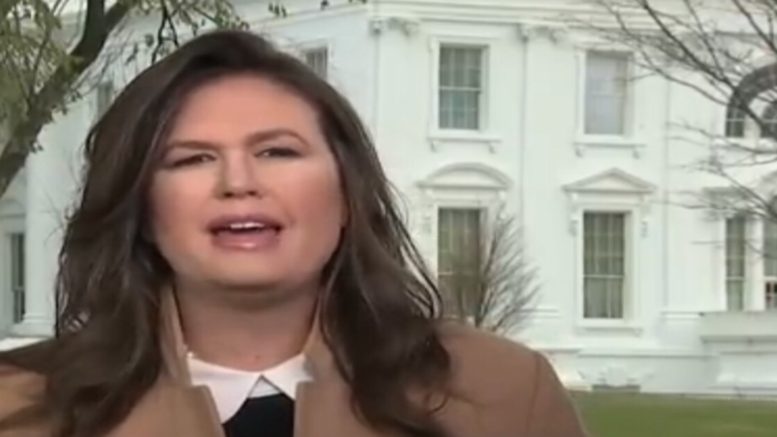 Sanders pushed back at Democrats who continue to their charades, attacks, smears against President Trump, and the administration.

During the interview, the press secretary explained President Trump’s decision to close the southern border after Mexico is failing to help with the crisis at the border.

Asked if President Trump is standing firm on his “threat” to shut down the southern border, Sanders replied “The President is taking his job as the Commander in Chief very seriously, in terms of protecting the American people. Even Obama’s Department of Homeland Security cabinet secretary, this past week, has said there’s a crisis at the border.”

Sanders explained that the President’s number one responsibility is to protect American life. “Democrats may not care about that. They may be perfectly fine watching women and children exploited as they make the treacherous journey up from the south across the southern border. They may be perfectly fine seeing babies frankly killed, right up until the moment of birth, but this President isn’t. He takes his job of protecting American life very seriously, and he’s going to do what it takes to make sure that happens.” (Continued Below)

The subject moved to House Democrats who are now going to subpoena for the full Mueller report this week.

(Related: Pres Trump Reacts As Nadler Prepares To Subpoena The Mueller Report: ‘Behind Closed Doors The Dems Are Laughing’)

Sanders said, “It just goes to show again what sore losers the Democrats really are. They got beat in 2016, because we had a better candidate with a better message and a better vision for America. Now we’re seeing that they’ve got beat again when it comes to the Mueller report. They were convinced– not only were they convinced, but they went out and lied about what they expected the Mueller report to tell America. And they got it wrong, they got it wrong in 2016.” (Video Below)

Asked what is the President’s goal on healthcare right now, Sanders said, “Certainly, the President wants to be the party of healthcare. It’s an important issue, and it’s one he wants to see us address. He’d love to be able to address it now, but we know that Democrats are controlled by the far-radical left wing of their party.”

Sanders added, “If Democrats change their mind and decide to get serious about fixing problems, instead of playing politics, we’re here and we’re ready to work with them to fix the broken system. We know Democrats aren’t serious about getting anything done. They want to play games, they want to attack the President, they want to play investigator instead of legislator, and they need to decide what they were elected to do. And so far over the last 100 days, that’s very little.” (Video Below)

Asked about security clearances and a whistleblower who came forward, she said that Democrats are acting in bad faith throughout the process. “They are asking for personal, confidential information that they know they know they have absolutely no right to see. We have worked with Democrats, we have been cooperative in this process.”

(Related: Jordan RIPS Cummings Over His Latest Committee Chair Tricks: ‘I’ve Never Seen Anything Like This’)

Sanders added, “We are not going to put 3 million people who are full times employees of the federal government that hold security clearances, personal information at risk, because Democrats want to pretend and play games instead of do their jobs. Unlike Democrats, we want to protect people’s personal, confidential information. By exploding one, you’re exploding all of their personal information, and I think Democrats know that. And I think what they’re doing is dangerous, and I think what they’re doing sad and shameful, and America deserves much better than that.

(Related: While Renewing His Vow To Close The Border, Trump Exposes Dems Weakness: ‘They Don’t Want Any Victory’)