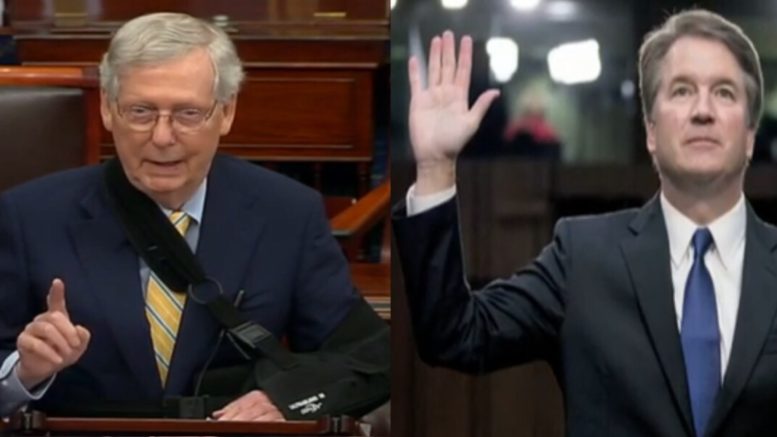 On Monday, Senate Majority Leader, Mitch McConnell (R-KY), issued a blistering response to Democratic presidential candidates and The New York Times after the paper published an article over the weekend trying to “revive” an alleged incident during Kavanaugh’s Supreme Court confirmation process.

The New York Times reported a story over the weekend about the account of a male Yale classmate of Brett Kavanaugh named Max Stier, who alleges that Kavanaugh, at the urging of some friends, performed an obscene act while mistreating a woman at a party.

The Times’ story, when it was published online Saturday, created a bizarre turn of events for the Times when it tweeted about the story, then retracted the tweet, only to retract the retraction and then offer an apology.

The update included the significant detail that several friends of the alleged victim, Harmon Joyce, said she did not recall the purported sexual assault in question at all. The Times also stated for the first time that the alleged victim refused to be interviewed, and has made no other comment about the episode, as reported by Fox News

“The reporting was so thin the story ran not in the news section, but on the opinion page,” Sen. McConnell pointed out Monday on the Senate floor. “In fact, they’ve already had to issue an ‘enormous correction.’ The writers conventionally failed to note that the supposed victim herself, declined to be interviewed. And several of her friends say ‘she has no memory of such thing happening.'”

“We all remember this pattern from last time around,” the Senate Leader said. “Shoot first, wreck the facts later. And here’s another familiar pattern just like last September: little things like facts and evidence didn’t stop Democrats from rushing to exploit this, even as the media was trying to back peddle.” [Emphasized] (Continued Below)

Sen. McConnell explained how a number of Democratic presidential candidates jumped the gun and rushed to get ahead of each other to declared that Kavanaugh must be impeached. “[They] hysterically called for Justice Kavanaugh to be ‘impeached’ on this basis of this flimsy, uncorroborated story. They’re calling for Justice Kavanaugh to be impeached!” he declared. “That includes several of our own Senate colleagues.” [Emphasized]

“And even after the massive correction, no one in that group has backed off from the ridiculous threat,” he stressed. “This laughable suggestion is already earning scorn throughout the country, across the political spectrum. A majority of Senators and the American people rightly rejected the politics of unsubstantiated personal disruption, just last year.”

McConnell said that it is “just as transparent and self-serving today, one year later,” adding, “But it would be a mistake to dismiss this as a case of sour grapes. This is not just a leftwing obsession with one man. It’s part of a deliberate effort to attack judicial independence.” (Continued Below)

The Kentucky Senator pointed out that six Democratic candidates, and one who quit to run for Senate, have “publicly flirted with packing the supreme court.”

“Court-packing!” McConnell declared and reiterated. “Court-packing! Today’s bold new Democratic idea of a failed power grab from back in the 1930s. Just weeks ago, some Senate Democrats nakedly threatened the Supreme Court Justices in writing!”

Last month, The Freedom Times reported that a brief was filed in a case related to a New York City gun law. Sens. Sheldon Whitehouse, D-R.I., Richard Blumenthal, D-Conn., Mazie Hirono, D-Hawaii, Richard Durbin, D-Ill., and Kirsten Gillibrand, D-N.Y., referenced rulings by the court’s conservative majority in claiming it is suffering from some sort of affliction which must be remedied,

“The Supreme Court is not well. And the people know it,” the brief said. “Perhaps the Court can heal itself before the public demands it be ‘restructured in order to reduce the influence of politics.’”

Fox News reported, dramatic changes to the Supreme Court have been proposed by several Democrats vying for their party’s 2020 presidential nomination, with “court-packing” being a common — though highly controversial — suggestion. Increasing the number of justices on the court would allow the president to shift the balance on the bench by loading up justices of his or her preference.

Democratic candidates, including former Rep. Beto O’Rourke of Texas, and Sens. Cory Booker of New Jersey, Elizabeth Warren of Massachusetts, Kamala Harris of California, and Gillibrand, all have signaled an openness to expanding the number of judges on the court should they reach the White House, as per Fox News. (Video Below)

“Here was the punchline: either issue rulings that we like or we’ll pack the court. This is not normal political behavior. These are the actions of a political party whose agenda is so ailing to the Constitution that they feel threatened by fair and faithful judges. When the simple notion that judges should be favorable to the Consitution, looks like an attack on your agenda– maybe it’s your agenda that needs a makeover, not our independent judiciary,” McConnell fired back.

“When you’re this willing to launch unhinged personal attacks, you reveal a whole lot more about your own radicalism than about the men and women you target. This is my commitment and the commitment of all my Republican colleagues: as long as we remain in the Senate, we will fight to preserve our fair and independent judiciary,” the Senate Majority Leader vowed.

(Related: Brit Hume RIPS NYT For Trying To ‘Revive’ The ‘Smear’ Against Kavanaugh: ‘They Are Corrupt’)