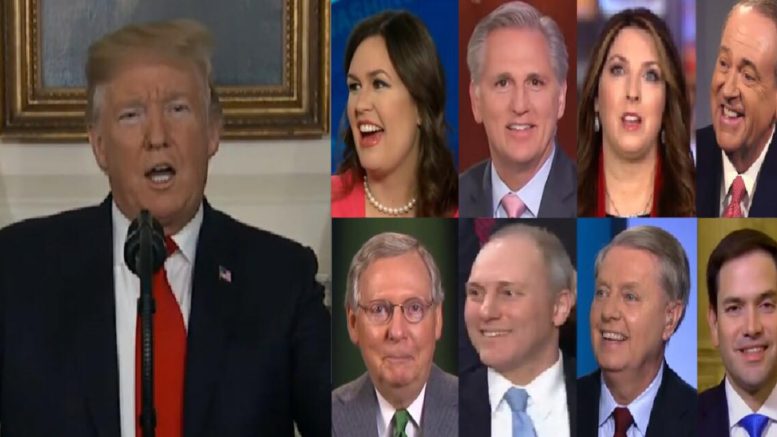 On Saturday, President Trump addressed the nation and outlined his plan to address border security concerns and put an end to the partial government shutdown. The plan includes the temporary extension of legal protections for DACA recipients and funding for the wall.

Several Senators and Representatives praised the President for his leadership and willingness to negotiate and compromise with Democrats on the issue of wall funding.

As the President addressed the nation on Saturday, he introduced the main points of his proposed plan and said, “This is a common-sense compromise that both parties should embrace.”

The Commander in Chief concluded in his speech, “Whatever we do, I can promise you this, I will never forget that my first duty and ultimate loyalty is to you, the American people. Any reforms we make to our immigration system will be designed to improve your lives, make your community safer, and make our nation more prosperous and secure for generations to come.”

Senate Majority Leader, Mitch McConnell tweeted, “I commend @POTUS for his leadership in proposing this bold solution to reopen the government, secure the border, and take bipartisan steps toward addressing current immigration issues.” (Continued Below)

House Republican Whip Steve Scalise said, “The contrast between @realDonaldTrump & Democrats could not be clearer today: people can see he’s serious about ending the shutdown & securing our border, while Democrats have yet to make a single legitimate counteroffer throughout the last month the government has been shut down.”

GOP Chairwoman, Ronna McDaniel said, “@realDonaldTrump has shown strong leadership with this bold plan to re-open the government and fund border security. What are Democrats offering? Nothing. Their baseless opposition has gone on long enough.” (Continued Below)

Rep. Matt Gaetz (R-FL) tweeted, “I agree with @realDonaldTrump & @marcorubio. The President has presented a win-win. We get our wall, Dems save the Dreamers. Together, we open government & move forward. The alternative is a terrible lose-lose for the nation. Common Dems, let’s work together!”

Sen. Marco Rubio (R-FL) wrote, “@POTUS offers to support two bills sponsored by Dems in exchange for Border Security & the instant reaction from Dem leaders is No. Because denying him a win on border matters more to them than paying fed workers or 3 yrs of certainty for TPS & DACA recipients.”

He added, “Next week Senate will take up bill that: – Extends TPS & DACA – Funds disaster relief – Funds humanitarian aid for migrants – Ends #Shutdown But Dem leaders reject it because includes some Border Security money. This is completely irrational obstructionism.” Rubio continued, “Bill will also – allow migrants to apply for asylum in home country instead of having to make the dangerous journey to try & cross the U.S. border – extend for another 3 years protection for those under TPS from Haiti, Honduras & Nicaragua.”

Rep. Mark Meadows (R-NC)  said, “This is the latest and most significant step yet of POTUS showing his willingness to negotiate and compromise with Democrats on the issue of wall funding. At this point, if Democrats refuse to come to the table, it will show they are not at all serious about solving this impasse.”

Sen. Marsha Blackburn (R-TN) wrote, “@realDonaldTrump  is correct. The problems of open borders create problems that spread across the country, making every town a border town and every state a border state.

Sen. Rick Scott (R-FL) tweeted, “I applaud @realdonaldtrump for proposing a compromise that re-opens government, protects our borders and takes care of those brought to this country illegally through no fault of their own. Children should never be punished for the actions of their parents, and I’ve always supported protections for our DREAMers. Now it’s time for Democrats to decide if they want to negotiate in good faith and accept a compromise that secures our borders and protects DREAMers or if they want to continue playing politics. I hope they choose the former so we can get to work fixing problems for the American people.”

Former Gov. Mike Huckabee (R-AR) wrote, “We’ll soon know if Pelosi, Chuck and the Dems really care about Dreamers and Gov’t workers or not. @realDonaldTrump has offered MORE than they had even asked for. If they say “no,” they reveal it’s not about shutdown, but showdown. It’s time to either poop or get off the pot!”

Sen. Mitt Romney (R-UT) said, “@POTUS has put forth a reasonable, good faith proposal that will reopen the government and help secure the border. I look forward to voting for it and will work to encourage my Republican and Democratic colleagues to do the same.”

Rep. Lee Zeldin (R-NY) tweeted, “It’s past time for @SpeakerPelosi to negotiate & compromise. She’s admitted she won’t even negotiate w/POTUS after the shutdown on increased $ to harden our border. Unacceptable. She doesn’t have absolute power. No one does. Let’s talk to each other & work it all out. No excuses!”

President Trump’s Remarks on the Humanitarian Crisis at the southern border and the shutdown along with Senators and Representatives official tweets: