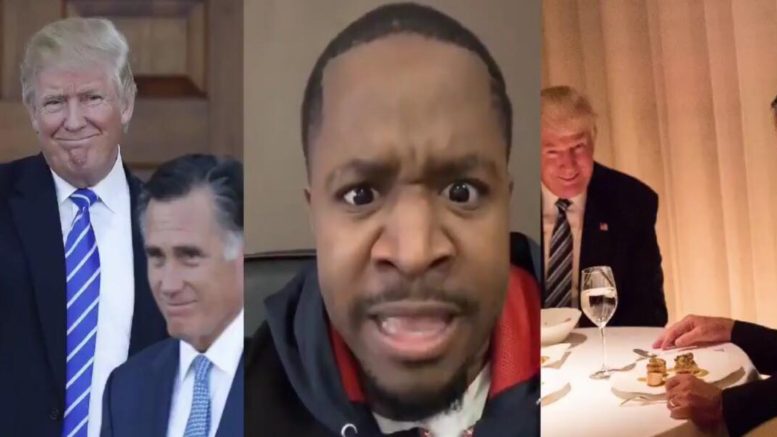 Internet sensation, Terrence Williams, is not happy with Mitt Romney, (R-UT) after his latest jab he took at President Trump in an Op-Ed written in The Washington Post.

The freshman Senator’s piece is not only disappointing and unproductive, but exactly what the Democrats and media feed on, Romney’s niece pointed out. (Video Below)

In The Washington Post Op-Ed, Mitt Romney wrote, “It is well known that Donald Trump was not my choice for the Republican presidential nomination. After he became the nominee, I hoped his campaign would refrain from resentment and name-calling. It did not.”

He continued, “When he won the election, I hoped he would rise to the occasion. His early appointments of Rex Tillerson, Jeff Sessions, Nikki Haley, Gary Cohn, H.R. McMaster, Kelly and Mattis were encouraging. But, on balance, his conduct over the past two years, particularly his actions last month, is evidence that the president has not risen to the mantle of the office.”

Romney also said, “Furthermore, I will act as I would with any president, in or out of my party: I will support policies that I believe are in the best interest of the country and my state, and oppose those that are not. I do not intend to comment on every tweet or fault. But I will speak out against significant statements or actions that are divisive, racist, sexist, anti-immigrant, dishonest or destructive to democratic institutions.”

Terrence Williams was not having it, and he struck back blasting Mitt Romney in a video online. (Video Below)

“Mitt Romney, I’m about to read you your rights,” Terrence began. “You got the right to shut up before you keep making yourself look stupid. You got the nerve to be running your mouth about the President. 2019 just started; you’re already being messy and petty. You ought to be ashamed of yourself starting the New Year out being messy.”

Terrence continued his rant, “And you know what? Ever since Obama molly-whopped you, ever since he beat you… yeah, you sore loser, you have been bitter ever since. You ain’t nothing but an old, bitter, jealous man. Stop hating on Donald Trump. I can’t believe you tried to tell him how he should be President! You don’t know what it takes to be a President; that’s why you lost, and you will never be a President. Never.”

Then, Terrence went after Romney for his “potential Presidential run” in 2020.

Terrence concluded his rant by saying, “Old petty and messy butt, you get on my last nerve.”

Further, he wrote on Twitter with his video, “Mitt Romney is Messy and Petty! He started his New Year off dissing Trump and he may also run in 2020. NOW CNN Loves Mitt Romney! What a joke.”

(Related Article: Mitt Romney Gets RIPPED A New One By His Own Niece Just Hours After Attacking Trump)