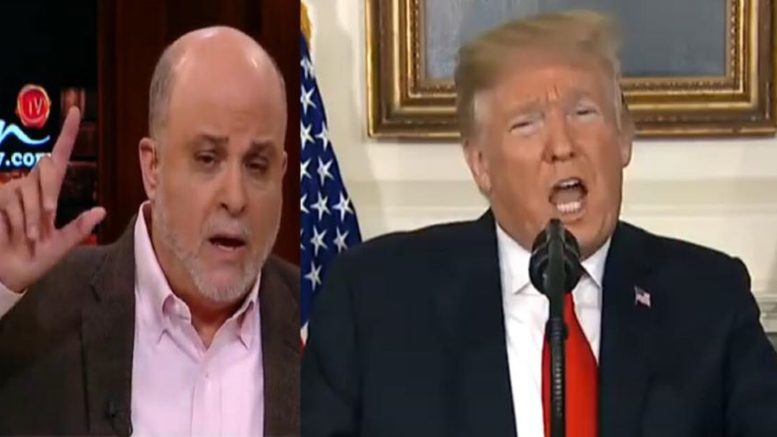 Mark Levin, “the great one,” praised President Trump on Sunday for his Saturday border offer to congressional Democrats.

Further he wrote on Facebook showing his support, and he called into “Fox and Friends” Sunday morning with the same message. (Video Below)

On Saturday, President Trump addressed the nation and outlined his plan to address border security concerns and put an end to the partial government shutdown. The plan includes the temporary extension of legal protections for DACA recipients and funding for the wall.

The Commander in Chief introduced the main points of his proposed plan and said, “This is a common-sense compromise that both parties should embrace.”

President Trump also announced that he expected his proposed plan to be taken up in the Senate by Majority Leader Mitch McConnell sometime in the next week. (Video Below)

Mark Levin pointed out that the key to Trump’s proposal is that he offered no amnesty to illegal immigrants.

Taking to twitter, the President warned on Sunday for Speaker Nancy Pelosi to “be careful,” and that “there will be no big push to remove the 11,000,000 plus people who are here illegally.”

Levin declared, “[Trump has] taken amnesty off the table, unlike every Republican president in the last 30 years, right off the top. He’s not a fool. He’s said ‘you know what? I’ve seen this go on for 30 years,’ and the president is saying enough of the lying to the American people. It’s time Nancy Pelosi side with the American people.” (Video Below)

Levin added that there has been enough of foreign governments steamrolling the United States and sending undocumented citizens to America.

He also pointed out that President Trump wants to defend American sovereignty, and that Pelosi doesn’t stand for the American people.

Further, he wrote on Facebook Saturday, “I strongly support President Trump’s immigration proposal today. Pelosi & Schumer rejected it even before the president spoke to the nation & made his proposal. They’re radical know-nothings. Let’s hope some rank-and-file Democrats break from their open-border leadership and vote for it. You should contact your members of Congress & urge them to do so.”