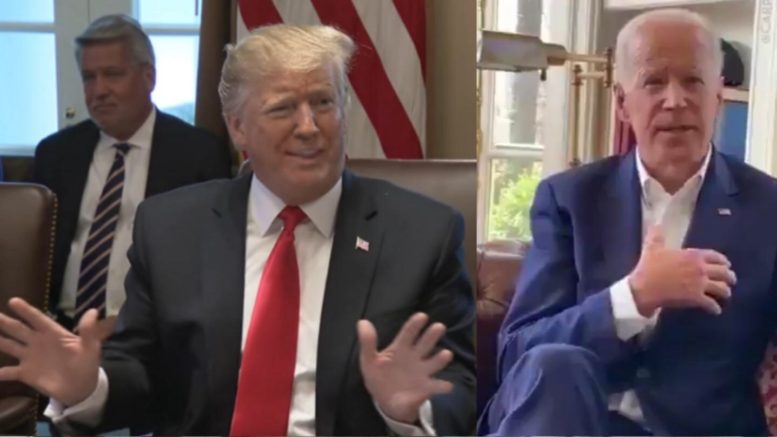 President Trump took to Twitter Thursday where he trolled Joe Biden by tweeting a doctored video of the former vice president after a series of misconduct allegations have been thrown his way.

Biden posted a video on Twitter Wednesday in which he acknowledged his physical displays of affection and that it may have made some women uncomfortable. In it, he also promised to be “much more mindful” of respecting personal space.

President Trump tweeted a clip of Biden’s apology that featured an image of the ex-vice president lurking in the background, where he placed his hands on his own shoulders and his face in the back of his head as if he is smelling his hair.

The image used for the faux Biden is from the viral photo of him placing his hands on the shoulders of Stephanie Carter, the wife of former Secretary of Defense Ash Carter. The photographs of Biden and Carter made their way back into the public eye following recent claims of Biden’s inappropriate behavior toward women, per Fox News.

Joe Biden wrote on Twitter Wednesday, “Social norms are changing. I understand that, and I’ve heard what these women are saying. Politics to me has always been about making connections, but I will be more mindful about respecting personal space in the future. That’s my responsibility and I will meet it.” (Continued Below)

The video was Biden’s first direct comment on what has tripped up his preparations to enter the 2020 Democratic presidential campaign. He did not directly apologize but seemed to be seeking to ease some people’s discomfort, which has raised questions about whether he could wage an effective campaign, reported Fox News.

At least three other women have also come forward to accuse Biden of similar actions. (Videos Below)

Social norms are changing. I understand that, and I’ve heard what these women are saying. Politics to me has always been about making connections, but I will be more mindful about respecting personal space in the future. That’s my responsibility and I will meet it. pic.twitter.com/Ya2mf5ODts

We leave you with a short clip of President Trump during the NRCC Dinner mocking Biden again: