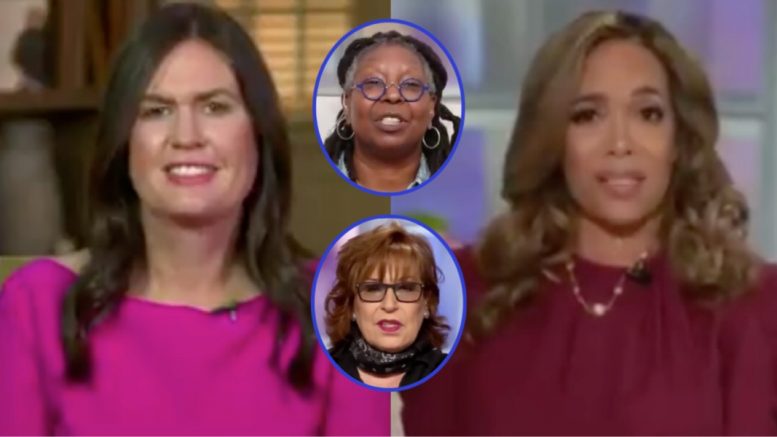 Former White House press secretary Sarah Huckabee Sanders spoke with ABC’s “The View” to talk about her new book, “Speaking for Myself: Faith, Freedom, and the Fight of Our Lives Inside the Trump White House“, which was released Tuesday.

During the interview, however, Sanders was pressed over the violence and riots which is occurring in Democratic run cities, and she fired back after the show, posting a clip of the segment saying, “No surprise The View tried to cut me off when I started exposing the pattern of unchecked mob violence in Democrat-run cities.”

Co-host Sunny Hostin recited a Democratic talking point, telling Sanders in part, “This is not Joe Biden’s America, this is Trump’s America; this is happening under your president’s watch”.

The former White House press secretary responded, though the ladies at “The View” appeared to cut her off.

“In Democrat run cities,” Sanders pointed out to Hostin. “Every place that you see these major incidences, these riots, is in Democrat-led cities. And it’s not like they just became Democrat-led cities, they’ve been Democrat-run for decades. The worse places we have these problems are where Democrats have been allowed to lead. We’re finally starting to clean this mess up, starting to make things better.”

“This a president who has empowered the African American community. He’s done more than his predecessors. We have the lowest unemployment for Black Americans, historic funding for HBCU’s, opportunity zones, criminal justice reform,” she added, while the ladies at The View could be heard huffing over Sanders’ remarks. Video Below

Read the truth about our fight against the liberal mob in my new book, available NOW at https://t.co/NpuyebjBHb pic.twitter.com/8LOAha4h1F

Question: Prior to Covid-19, was unemployment among blacks / African Americans at a record low as President Trump has claimed? Using the available data, which extends back to January 1972, the answer is yes. This new record low was achieved in October and November of 2019 when unemployment among black or African American workers fell to 5.1%. The previous record low was 5.2% in December 1973. The most recent high in unemployment for this group was 19.3% in March 2010, Forbes reported.

In December 2018, President Trump signed a bipartisan bill that will permanently provide more than $250 million a year to the nation’s historically black colleges and universities, along with dozens of other institutions that serve large shares of minority students.

An Opportunity Zone is an economically-distressed community where private investments, under certain conditions, may be eligible for capital gain tax incentives, according to EDA.

Opportunity Zones were created under the 2017 Tax Cuts and Jobs Act, signed into law by President Donald J. Trump on December 22, 2017, to stimulate economic development and job creation, by incentivizing long- term investments in low-income neighborhoods.

The First Step Act, which President Trump signed into law in 2018, is the most significant criminal justice reform legislation in years, enacting historic reforms to make our justice system fairer for all.