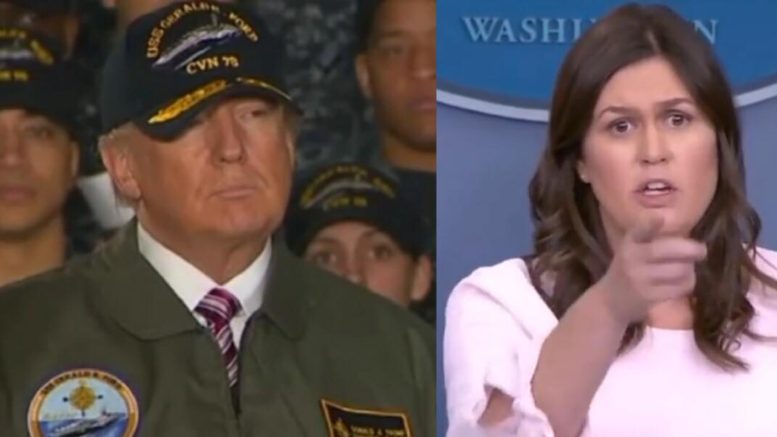 This comes amid the partial government shutdown and the Commander in Chief’s stance on securing the border. (Video Below)

Despite the opposition and obstruction from Democrats, President Trump remains strong to protect the safety of all Americans from illegal immigrants crossing the border who bring crime, drugs, human trafficking and more, according to the Department of Homeland Security and Border Control agents.

The President offered his strongest endorsement yet of a proposal to build a steel wall, rather than a concrete barrier, at the southern border and he established a new pitch for a steel wall as a compromise to Democrats to move negotiations along.

“They don’t like concrete, so we’ll give them steel,” Trump told reporters after returning to the White House from a meeting with his advisers at Camp David on Sunday. (Video Below)

Further, the Commander in Chief said during a news conference at the White House in the Rose Garden Friday afternoon that he is considering declaring a national emergency to circumvent congressional approval to allocate funds for border wall. (Related Article: President Trump Puts His Foot Down On Border Security & Wall, Considers Declaring ‘National Emergency’)

When asked by a reporter during the news conference if he has considered using emergency powers to grant himself authorities to build the wall without congressional approval, President Trump quickly responded, “Yes I have, and I can do it if I want.” He added, “We can do it. I haven’t done it. I may do it, but we can call a national emergency and build it very quickly. It’s another way of doing it, but if we can do it through a negotiated process, we’re giving that a shot.”

The President said during his surprise visit at the briefing, “You can call it a wall, you can call it a barrier, you can call it whatever you want, but essentially, we need protection. We’re gonna make it good. The people of our country want it.” He added, “I have never had so much support as I have in the last week over my stance on border security for border control and for frankly the wall or the barrier.”

He explained he’s had several calls coming in and writing for support of the wall.

Speaker Nancy Pelosi said in an interview last week, “Nothing for the wall. We’re talking about border security.” She also claimed the wall is immoral.

White House Press Secretary Sarah Huckabee Sanders tweeted, “President @realDonaldTrump will travel to the Southern border on Thursday to meet with those on the frontlines of the national security and humanitarian crisis. More details will be announced soon.”

The President visited the border in March of 2018 when he viewed wall prototypes in California.

(Related Article: During Trump’s Cali Visit, Reporters Were Instantly SHOCKED By What They Saw In The Distance)

President @realDonaldTrump will travel to the Southern border on Thursday to meet with those on the frontlines of the national security and humanitarian crisis. More details will be announced soon.

Additionally, President Trump announced that he will address the nation on Tuesday at 9 p.m. ET regarding the shutdown before his visit to the border; White House chief correspondent John Roberts reports.

WATCH: Romney Gets Confronted At Utah Airport, Passengers Chant ‘Traitor’ After He Boards The Plane