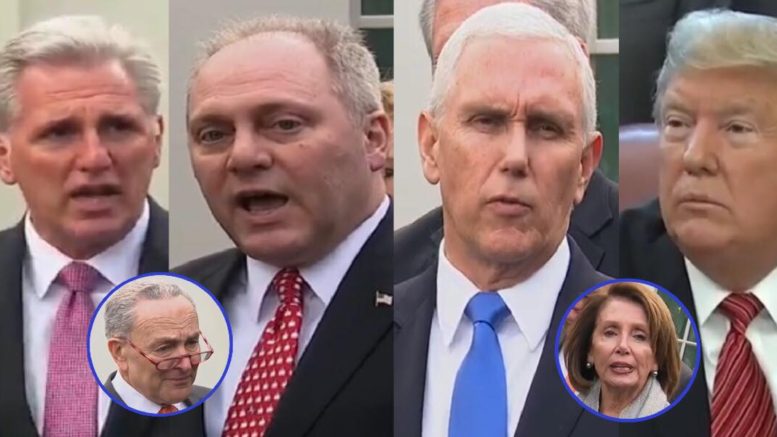 The Commander in Chief walked out  of a White House meeting with House Speaker Nancy Pelosi and Senate Minority Leader Chuck Schumer, after the Democrats said they wouldn’t agree to a border wall on Wednesday.

President Trump took to Twitter immediately after letting everyone know exactly what happened before Chuck and Nancy spinned the story. (Videos Below)

The President wrote on Twitter right after Nancy Pelosi and Chuck Schumer refused to budge on the securing the southern border. They don’t care about Americans.

He wrote, “Just left a meeting with Chuck and Nancy, a total waste of time,” Trump tweeted. “I asked what is going to happen in 30 days if I quickly open things up, are you going to approve Border Security which includes a Wall or Steel Barrier? Nancy said, NO. I said bye-bye, nothing else works!”

Pence announced bluntly, “The President has made it clear that there will be no deal without a wall.” (Videos Below)

Without any deal in Congress, President Trump has threatened to invoke his emergency powers to fund the wall.

(Related Article: Trump Tells The Press When He’ll Be Forced To Unleash His Plan B For The Wall: ‘If I Can’t Make A Deal With People That Are Unreasonable’)

The meeting was the latest attempt by President Trump, Pelosi and Schumer to find some agreement to fund the government. The government has been partially shutdown for nearly three weeks because they can’t agree on funding the border wall that Trump wants to build on the southern U.S. border. (Videos Below)

While speaking to reporters Chuck Schumer and Nancy Pelosi were offended by President Trump’s decision to walk out of their meeting. Schumer called Trump’s departure “somewhat unbecoming of a presidency.” Trump had become furious, according to Schumer.

“He sort of slammed the table, and when Leader Pelosi said she didn’t agree with the wall, he just walked out and said, we have nothing to discuss,” Schumer said.

Republicans disputed Schumer’s characterization of Trump’s conduct. “I don’t recall him ever raising his voice or slamming his hand,” Vice President Pence told reporters that President Trump had walked into the session handing out candy.

Kevin McCarthy added, “The way that Democrats just behaved in our meeting at the White House is embarrassing.”

WATCH: VP Pence says Democrats demanded the White House commit to opening the gov't before negotiations begin, and President Trump asked Speaker Pelosi if he were to open the gov't, would she be willing to agree to wall funding?

"When she said no, the president said goodbye." pic.twitter.com/dnZuBxLYqL

John Kerry: ‘AOC Has Offered More Leadership In One Day Than Trump Has In His Lifetime On [Climate Change]’

Rep. Chip Roy to DHS Sec. Mayorkas: ‘Your Agency is Releasing People on Purpose in Order to Flood the Zone & Make Sure That More People can Come to the United States’