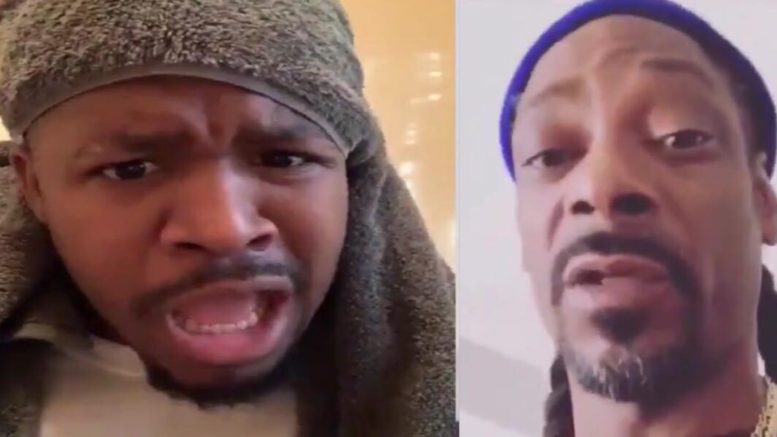 Terrence is apparently no fan of Snoop Dog, and he put him directly in his place. (Video Below)

Terrence Willams reacted to recent comments Snoop Dog made about President Trump, after Snoop went on a profanity laced rant.

In a video Terrence posted, it began with Snoop Dog thrashing Trump over the partial government shutdown.

Snoop said, “All you people for the federal government that got… not getting paid right now… ain’t no f**king way in the world ya’ll can vote for Donald Trump when he come back up again. Ya’ll some stupid mother f**kers. I’m saying that to ya’ll early.”

Snoop continued his rant, “All you federal government people that’s not being paid that are being treated unf**king fairly right now… that’s so terrible. That punk mother f**ker don’t care, so I’m saying that, to say this: When the sh*t get back on and ya’ll get your jobs back and it’s time to vote, don’t vote for that n*****, please. Please don’t. F**k him too. F**k everybody down with Donald Trump. I said it. Yeah, Snoop Dog, n****.” (Video Below)

Terrance went off and responded to Snoop Dogs ignorance.

“Boy, bye! First of all Snoop, you look like a sick dog, washed up rapper, sitting up here looking like Predator vs Alien from the hood.” Terrance said while laughing.

“Boy, nobody cares what you got to say. Why are you running your mouth Snoop Dog? First of all, I thought your ghetto butt got shot back in 1999.” Terrance pushed back, “You’re talking about “F” everybody who’s down with Donald Trump? No! F-U Snoop Dog! No, F-U!” (Video Below)

Terrence continued and pointed out Snoops hypocrisy, “For a long time you’ve been rapping about pimping women, selling drugs, killing people, you’ve been supporting gangs, and you still do. So, it ain’t ‘F’ us, it ain’t ‘F’ Donald Trump either, it’s ‘F’ you! As a matter of fact, we need to put you over that wall.”

He kept blasting Snoop Dog and said his blood pressure was raised, adding that he was all “rowdy, rowdy” on a Sunday. “Ain’t nobody got time for you, Snoop Dog! Shut your mouth!”

Terrence continued, “from one black man to another, you ought to be ashamed of yourself for influencing young kids to sell drugs, pimp women, and gang bang.”

Terrence tweeted along with the video, “Rapper Snoop Dog said F**CK Trump & Everyone who supports him. *Can someone give me a number of how many celebrities or democrats said F***K Obama when he shut down the government? Hey @RealJamesWoods do you know how many ? I need numbers!”

Rapper Snoop Dog said F**CK Trump & Everyone who supports him.

*Can someone give me a number of how many celebrities or democrats said F***K Obama when he shut down the government?

Hey @RealJamesWoods do you know how many ? I need numbers! pic.twitter.com/7QcpDPcOho