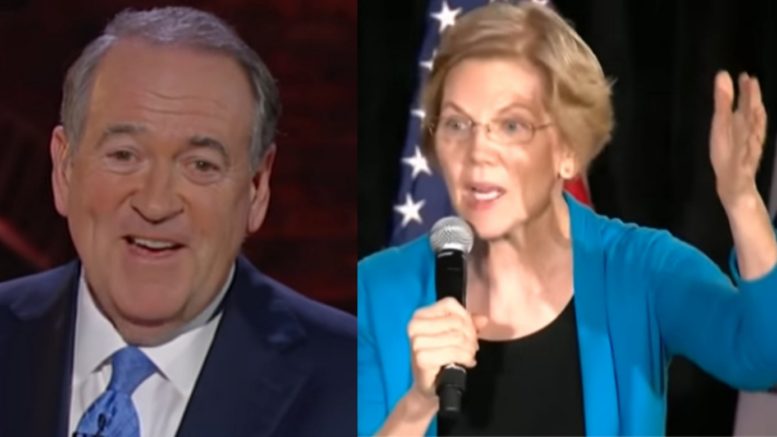 Mike Huckabee is full of jokes and has a great time sharing them on social media on a regular basis.

With the race for 2020 already heating up on the left, Huckabee couldn’t resist targeting the first official Democrat candidate for President, Senator Elizabeth Warren.

Not only did Warren announce her bid for President on New Years Eve, but she also took part in a live video that featured her awkwardly drinking a beer.

It was the latest in a strange chain of events that all started before the 2018 midterms, when Warren made a DNA test public that showed she is between 98.44% and 99.9% not Native American. The test contradicted earlier claims made by the Senator that she was Native American.

Related Article: Gowdy Tosses Warren’s Beer Episode Back In Her Face After She Calls Him A ‘Lobbyist’’

In a well-timed statement overshadowing Warren’s trip to Iowa, Mike Huckabee had a little fun and hypothesized what Warren’s next career move would be if she loses in 2020. See Below

MIKE HUCKABEE SLAMS ELIZABETH WARREN WITH A PAIR OF HYPOTHETICALS!

Huckabee took to Twitter and wrote, “Breaking wind from CNN! Elizabeth Warren in Iowa today announces that if her bid to be @POTUS doesn’t go well she will leave Senate and become spokesperson for http://Ancestry.com  and Anheuser-Busch.”

Breaking wind from CNN! Elizabeth Warren in Iowa today announces that if her bid to be @POTUS doesn’t go well she will leave Senate and become spokesperson for https://t.co/Va6wWfE2BB and Anheuser-Busch.

Warren will likely be forced to be on the defensive as more Democrats jump into the ring and the race heats up even more!

We leave you with a recent video of Huckabee taking on Democrats’ impeachment stance against the President.