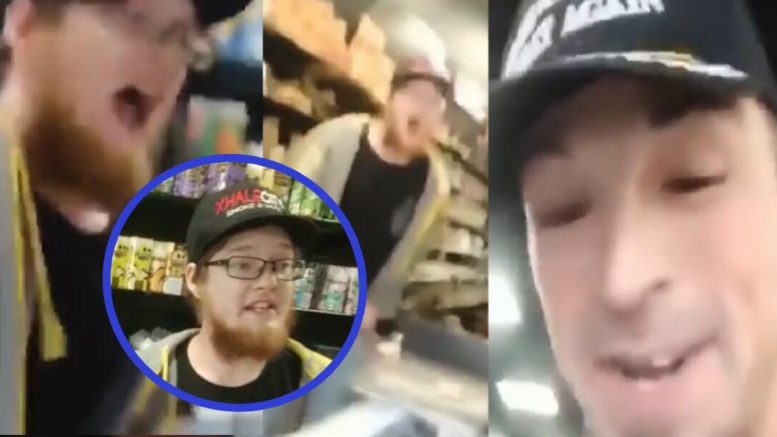 A video posted to Facebook Friday went viral with over a million views and continues to spread throughout social media.

The video shows a Georgia vape store clerk screaming at a customer wearing Trump gear. The clerk has full blown Trump derangement syndrome and had a full blown meltdown. (Video Below)

The video on Facebook, posted by Ian Furgeson shows where he attempted to make a purchase for his wife at XHale City in Tucker, Georgia, despite the screaming of the clerk, who was severely triggered by Furgeson’s Trump shirt and MAGA hat.

The clerk can be seen in the video having a melt down and screaming, “Leave the store! F**k off! Get the f**k out of here!” At one point, the clerk even appears to take a swing at Furgeson while another customer is waiting for service and witnessed the clerks tantrum. The customer is standing to the side and he appears to be thinking, “What the heck is going on?!”

Later in the video, the clerk begins to ring the customer up, but he is triggered again when Furgeson said, “God bless America, capitalism wins again.”

Although all social media accounts for the store seem to have been shut down, Breitbart reported the contents of a post that appeared Friday night saying the store clerk had been fired. Calls to the store went unanswered.

“To our friends and customers,” the post read, according to Breitbart. “Tonight, we had an employee act improperly toward a customer. Xhale City does not tolerate this kind of behavior from its employees. When we identified the employee at fault, we fired him immediately. We’ve also spoken to the customer and apologized. We value our clients and treat them with respect and dignity, regardless of their political views.” (Video Below)