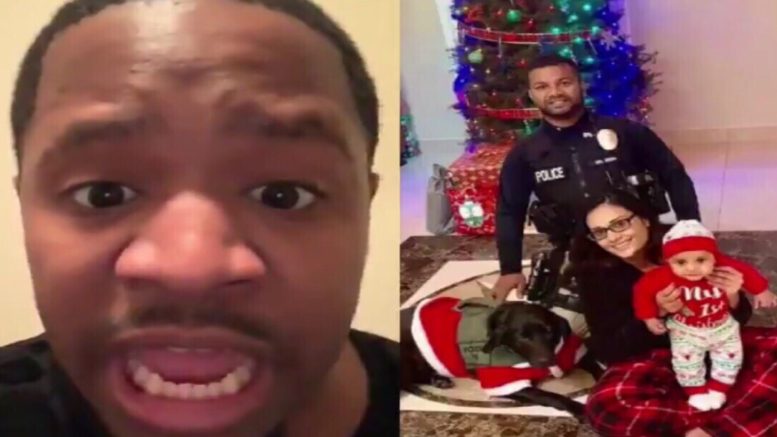 Terrence K. Williams is a conservative comedian who is also a viral internet sensation for his rants about political commentary.

Terrence is genuinely upset about the young police officer who recently lost his life in a routine traffic stop to an illegal alien. (Video below.)

The gunman who killed the office was in our Country illegally.

In a genuine plea, Terrance tweeted a photograph of the young officer, his wife and his beautiful new born baby.

In Terrence’s tweet he said, “Breaking News! A Police Officer was shot and killed by an Illegal Immigrant!”

“This was the last picture he took with his family! So Sad! Im not politicizing this death I’m just speaking facts!” he tweeted.

Then in a plea, Terrence asked if folks would “*RETWEET to help find this killer!” then added the hashtag “#BuildTheWall.” (Video and photograph below.)

Terrance does not hold back and told the Democrats, “Your dreamer is a killer.”

“An officer just lost his life. He had a wife. A new born baby,” Terrance said with great passion.

WATCH as Terrance talks about the sad death of a Police officer at the hands of an illegal alien.

Breaking News! A Police Officer was shot and killed by an Illegal Immigrant!

This was the last picture he took with his family! So Sad!