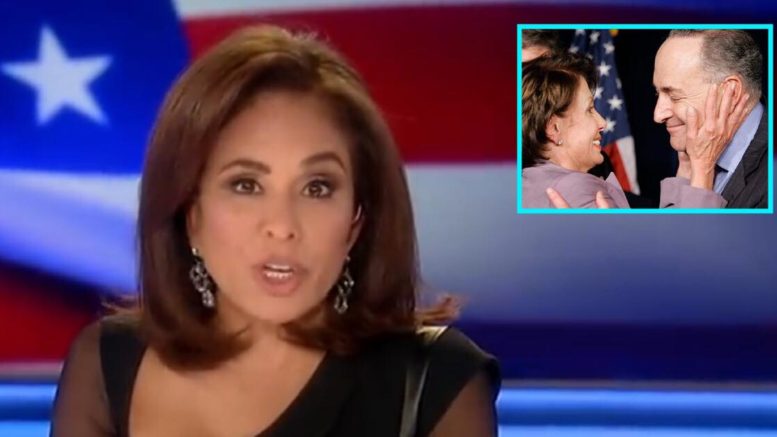 In her opening Saturday night, Judge Jeanine Pirro called on President Trump to “declare a national emergency” amid the crisis at the border.

“The President has been sitting in the Oval Office since Christmas Eve. He’s ready. If the Democrats aren’t coming to the table, the time to declare a national emergency is now.” Judge Jeanine declared. (Video Below)

Judge Jeanine explained that the president has shown he is capable of negotiating. He has gone from a concrete wall to a steel slat barrier. “He’s willing to go with any barrier, any physical barrier that you cannot climb over, crawl under, rappel, or shoot yourself out of a cannon over.”

“He’s made concessions from $25 billion to $5 billion. From a concrete barrier to a steel one. He’s promising more personnel, detention beds, using technology and electronics to buttress the security and money to address the humanitarian needs. In spite of his negotiations, the Democrats refuse to budge.” She pointed out.

The Judge proposed a solution and suggested, “There is no question that President Trump has the authority to declare a national emergency.  The controlling case is Youngstown Sheet & Tube v. Sawyer 343 U.S. 579.”

The critical operational issue is that only money already authorized and appropriated by Congress can be spent. The only serious source of funds is in the military construction bill. (Video Below)

Judge Jeanine said, “This week there was some debate whether that money would come from a line item of $13.1 billion dollars — covering housing in Afghanistan and Iraq, or a $13.9 billion line for disaster relief.”

She continued, “Now clearly, the $13.1 billion should be the line used since I doubt we need to build homes in Afghanistan and Iraq.”

“Now expect the Democrats to go forum shopping in California where the appeal goes directly to the liberal Ninth Circus aka Ninth Circuit — if the president declares an emergency using the military construction funds.  Assume they will win but on an appeal to the Supreme Court of the United States, they will lose under Youngstown.“The Judge added. (Video Below)

“And if you don’t think another caravan of thousands moving in a highly- organized fashion similar to military convoys with an advance party, a main body and a rear party, that has exhibited violence along the way with migrants in addition to those from Central America from Africa, Pakistan, Yemen, Afghanistan, India, Bangladesh, Nepal, and more is a national emergency, then you’re out and out crazy!” Judge Jeanine explained.

“The President has been sitting in the Oval Office since Christmas Eve. He’s ready. If the Democrats aren’t coming to the table, the time to declare a national emergency is now!” She concluded.