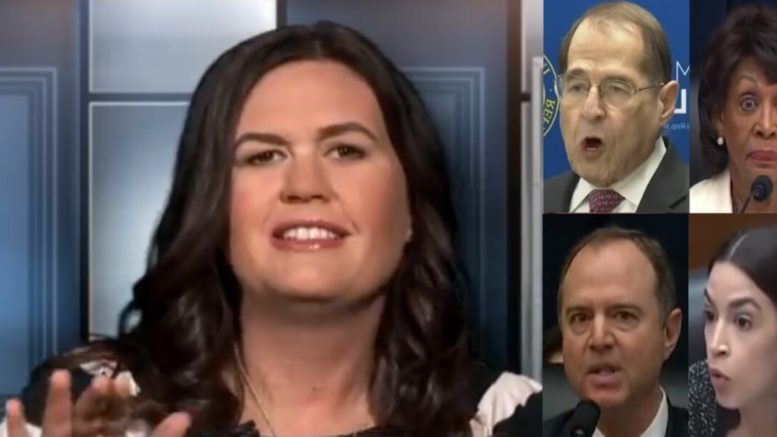 White House Press Secretary Sarah Huckabee Sanders joined host Sean Hannity on Fox News, where she weighed in on the Mueller report that was released Thursday.

Sanders cleared up allegations the liberal media threw her way in reference to she comments she made to the special counsel about FBI agents and former FBI Director, James Comey.

Sanders explained that what the White House has been saying over the last two and half years is correct; no collusion with Trump and Russia and no obstruction.

“It it outrageous the way the media and Democrats have behaved, and frankly the meltdown that we saw unfold on TV today is truly astonishing, but it’s a great day in America, not just because it’s a great day for the President, but it’s a good thing when they can say not just the president, not just his campaign, but no American was involved in colluding with a foreign government.” Sarah began.

She expressed, “And it’s a sad day in America when Democrats and member of the liberal media are sad that it didn’t happen!” [Emphasized] “To me that’s the most mind blowing thing of this– that they would actually want someone from their own country to work with a foreign government to take down the President and interfere with the election.”

“The sad truth is, the one that we’ve known all along, President Trump is President because he had a better message, a better vision and he simply outworked his opponent. He beat Hillary Clinton fair and square.” She said confidently. (Continued Below)

The press secretary touched on some comments that were found in the Mueller report and clarified after the media had a meltdown– in reference to the FBI and former Director James Comey after he was fired.

“I acknowledged that I had a slip of the tongue when I used the word ‘countless’, but, it’s not untrue. A number of both current and former FBI agents agreed with the President.” She explained.

“James Comey was a disgraced leaker who tried to politicize and undermine the very agency he was suppose to run. Firing James Comey remains one of the best decisions that the President made.” Sanders said.  (Videos Below)

In a Friday morning interview on “Good Morning America”, Sanders defended her 2017 claim again that “countless” FBI agents thanked President Donald Trump for firing FBI Director James Comey was made “in the heat of the moment.”

The report said that in an interview with the special counsel’s office, Sanders admitted that her claim in a White House press briefing shortly after Comey’s firing and repeated again in subsequent interviews that “countless FBI agents” had called the White House to thank Trump was “not founded on anything.”

During the press briefing on May 11, 2018, Sanders said she had “heard from countless members of the FBI that are grateful and thankful for the president’s decision.” (Continued Below)

(Related:  Mad As A Hornet, O’Reilly Goes Off On The Left’s Treatment Of The Mueller Report: ‘Do You Not Get Due Process?!’)

‘We Will Hold all of Them Accountable’: McCarthy Vows After Zuckerberg’s Admission of Suppressing Hunter Laptop Story