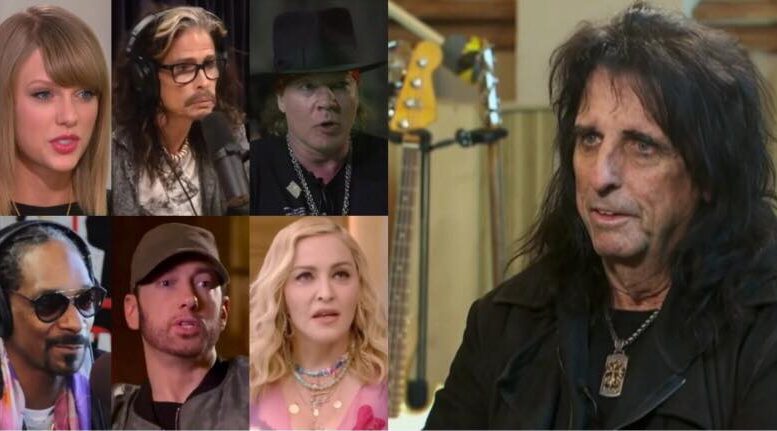 Alice Cooper (born Vincent Damon Furnier; February 4, 1948) is an American singer, songwriter, and actor whose career spans over fifty years. With his distinctive raspy voice and a stage show that features guillotines, electric chairs, fake blood, deadly snakes, baby dolls, and dueling swords, Cooper is considered by music journalists and peers alike to be “The Godfather of Shock Rock“. He has drawn equally from horror films, vaudeville, and garage rock to pioneer a macabre and theatrical brand of rock designed to shock people, per Wikipedia.

Originating in Phoenix, Arizona, in the late 1960s after he moved from Detroit, Michigan, “Alice Cooper” was originally a band consisting of Furnier on vocals and harmonica, Glen Buxton on lead guitar, Michael Bruce on rhythm guitar, Dennis Dunaway on bass guitar, and Neal Smith on drums. The original Alice Cooper band released its first album in 1969, according to Wikipedia.

The band broke into the international music mainstream with the 1971 hit song “I’m Eighteen” from their third studio album Love It to Death. The band reached their commercial peak in 1973 with their sixth studio album Billion Dollar Babies. In 2011, the original Alice Cooper band was inducted into the Rock and Roll Hall of Fame.

Cooper is known for his sociable and witty personality offstage, with The Rolling Stone Album Guide calling him the world’s most “beloved heavy metal entertainer”. He is credited with helping to shape the sound and look of heavy metal, and has been described as the artist who “first introduced horror imagery to rock’n’roll, and whose stagecraft and showmanship have permanently transformed the genre,” Wikipedia further notes.

Away from music, Cooper is a film actor, a golfing celebrity, a restaurateur, and, since 2004, a popular radio DJ with his classic rock show Nights with Alice Cooper. Nights with Alice Cooper is a radio show hosted by Detroit born rock and roll artist and shock rock pioneer Alice Cooper. It is syndicated by United Stations Radio Networks and broadcast on a wide variety of affiliate radio stations in the United States, Canada, the United Kingdom, Australia, New Zealand, and Europe.

However, in an interview with James McMahon of The Guardian, Alice Cooper revealed what he thinks about mixing rock’ n’ roll with politics. (Continued Below)

Alice Cooper said during his interview with The Guardian:

“The first thing I ever remember was my mother changing me at a bus stop. I was so embarrassed. Of course, I was 14 at the time. I jest. I was probably about two years old.”

“I was a church kid. I went every Wednesday night, Friday night, all day Sunday. My family had no problem with rock’n’roll. My parents were actually champion jitterbuggers in their day. It was the lifestyle they were concerned about. The drugs. The sleeping around. And they had a point. It was only when I got sober and had seen all my friends die that I realized they had a point. I’m making the best records I’ve ever made and my health is fantastic. I didn’t need that other stuff.” (Video Below)

“My mother lives with me. She’s a tiger. She’s 95 and is my biggest fan. If you say anything bad about Alice Cooper, she’ll be on top of you. I was lucky to get the parents I did.”

“I don’t like to mix politics and rock’n’roll. I don’t look at Bono, Sting and Bruce Springsteen as political. I look at them as being humanitarian. I’ll contribute to anything humanitarian. Helping people who can’t help themselves. But when musicians are telling people who to vote for, I think that’s an abuse of power. You’re telling your fans not to think for themselves, just to think like you. Rock’n’roll is about freedom- and that’s not freedom.”

“I want my shows to take you as far away as possible from politics. It’s supposed to be an escape from the world we’re living in. And you know the next president is going to be worse than Trump, right?”

Full interview can be read HERE.