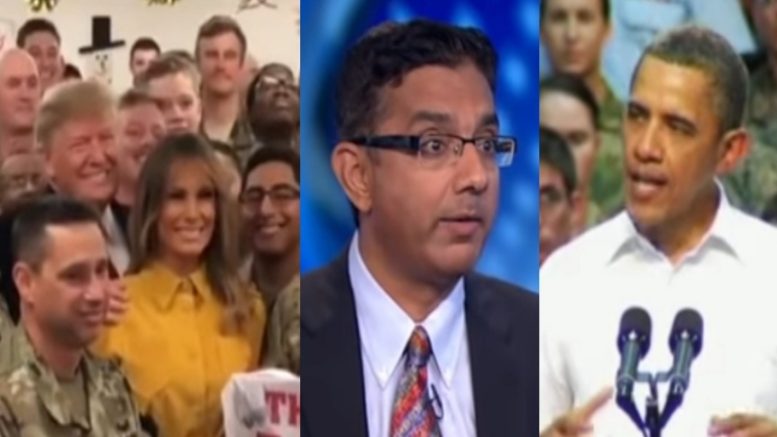 Conservative filmmaker, Dinesh D’Souza was pardoned by President Trump earlier this year. He was incarcerated by the Obama administration after producing a documentary that was unflattering about former President Obama.

Thursday Dinesh jumped in on twitter to support America’s Military and President Trump by comparing and contrasting Obama and Trump on Military visits. (More below.)

The difference is stark! President Trump is well-respected among the Military.

In sharp contrast to former President Obama, President Trump obviously loves the Military men and women. And the Military seem to be very happy with their new Commander-In-Chief, too.

Dinesh tweeted, “With Trump, the troops brought their own MAGA hats for him to sign,” he said. The leftist media made a ‘hay day’ when they found out Trump was signing MAGA hats in Iraq.

The media could not bare the Commander-in-Chief visited a combat zone during Christmas to support the Military troops. Dinesh had no problem reminding America how Obama was less than received by the Military, he said, “With Obama, they brought nothing.”

Then Dinesh said speaking about Obama, “so the narcissist-in-chief distributed signed photographs of himself.” (More below.)

But Wait! That’s not ALL Obama brought with him for “photo ops” with the troops.

Yes, Obama was caught in 2009 visiting Osan Air Base in South Korea when he “announced he would be increasing military pay, and – noticing troops holding cameras and cameraphones – stated, “you guys make a pretty good photo op,” as reported by Brietbart.

Then in April of 2009 in Iraq it was discovered that “they even handed out digital cameras and asked them to hold them up,” Ben Shapiro wrote. Shapiro also reported the soldiers were pre-screened then moved to the front of the receiving line if they had voted for Obama in the previous election.  All a big fake photo op.

The Military Times published a poll that said “55 percent of all troops surveyed rated Trump’s policies as favorable.” Yet, when asked about former President Obama, only “36 percent said they approve of [Obama’s] job as commander-in-chief.” A stark difference indeed.

With Trump, the troops brought their own MAGA hats for him to sign. With Obama, they brought nothing so the narcissist-in-chief distributed signed photographs of himself