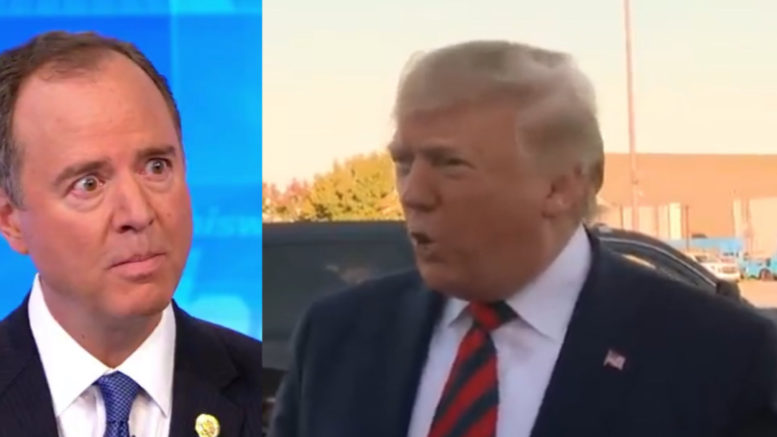 President Donald Trump spoke with reporters Monday and defended his decision on why he did not give Rep. Adam Schiff (D-CA) or other congressional leaders details in advance notice of the raid that resulted in the death of former ISIS leader Abu Bakr al-Baghdadi.

When the Commander in Chief gave a news conference Sunday morning, where he announced the death of Baghdadi, he had said he decided not to tell officials, including House Speaker Nancy Pelosi (D-CA), because leaks could have comprised the top-secret mission. “I wanted to make sure this was kept secret. I don’t want to have men lost and women. I don’t want to have people lost,” he said, adding that “Washington is a leaking machine”.

Asked if he is concerned that Nancy Pelosi and others can’t be trusted with this kind of information, President Trump replied, “The only thing is they were talking about why didn’t I give the information to Adam Schiff and his committee, and the answer is because I think Adam Schiff is the biggest leaker in Washington. You know that, I know that, we all know that. I’ve watched Adam Schiff leak. He’s a corrupt politician. He’s a leaker like nobody has ever seen before.”

“The House must be briefed on this raid, which the Russians but not top Congressional Leadership were notified of in advance, and on the administration’s overall strategy in the region,” Pelosi demanded Sunday in a press release. “Our military and allies deserve strong, smart and strategic leadership from Washington.”

Trump went on to blast Schiff for his handling of the impeachment investigation, including when he recited an embellished version of Trump’s July 25 phone call with Ukrainian President Volodymyr Zelensky, which Schiff later described as “parody.” Trump accused Schiff of committing a “criminal act” by putting the inaccurate version of the call on the record, as per Fox News.

“And just to finish it off, Adam Schiff went up before Congress and he made up my words. He didn’t copy my words, he didn’t know them probably at the time. … What Adam Schiff did will never be forgotten. He made up a conversation that was a phony fabrication and it was a fraud. And people shouldn’t be allowed to get away [with it.] They say he has immunity because he’s a member of Congress. People shouldn’t be allowed to do that. That’s a criminal act. What he did is a criminal act!” the Commander in Chief declared. (Video Below)

(Related: Schiff Says Trump Didn’t Tell Him Or Pelosi About Baghdadi Secret Mission: ‘The Reason To Notify Gang Of Eight Is When Things Go Wrong’)