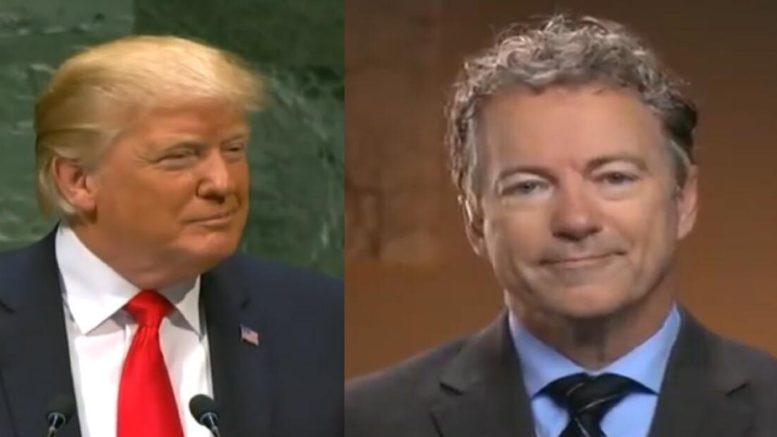 Senator Rand Paul (R-KY) said on Sunday he was “very proud” of President Trump for his decision last week to withdraw U.S. forces from Syria.

Paul’s comments came during an interview on CNN’s “State of the Union,” while discussing a number of topics with host Jake Tapper. (Video Below)

During his interview on CNN, Sen. Rand Paul said, “I’m very proud of the president,” on Trump’s decision to withdraw forces from Syria.

Rand continued, “This is exactly what he promised, and I think the people agree with him, actually. I think people believe we’ve been at war too long in too many places and we do need to turn attention to problems we have at home here. Roads, bridges, schools. We have a lot of problems in our country and people are tired of spending… we spent several trillion dollars on these wars everywhere and the president promised he would be different.

And it’s really one of the reasons he won, because he actually attracts independents who aren’t beholden to either party who say, ‘You know what? Why don’t we turn attention back to America?’” Rand added. (Video Below)

President Trump took note of Rand Paul’s comments and and thanked him in a post on Twitter.

The President wrote on Twitter Sunday afternoon, “Thanks @RandPaul “I am very proud of the President. This is exactly what he promised, and I think the people agree with him. We’ve been at war too long and in too many places…spent several trillion dollars on these wars everywhere. He’s different…that’s why he got elected.”

Rand Paul also briefly discussed the recent government shutdown and explained how to get funding for the border wall after he was asked if he supports the shutdown. “I’ve never been a fan of saying we are going to shut it down purposefully, but I’ve also not been a fan of keeping it open and spending so much money that we’re bankrupting the country.” (Video Below)

“This year the deficit will be a trillion dollars, and so, I don’t want to add more money. The Bill that they already have up there looks like a Christmas with all things added. I”m not against border wall funding though. I would find it, and I would pay for it. Right now we’re spending 50 billion a year in Afghanistan. We could easily find 5 billion for a wall if we weren’t spending so much money building and rebuilding Afghanistan.” Rand explained.

Kevin McCarthy Slams Joe Biden: “He Has Turned His Back On His Duties As Commander-In-Chief”