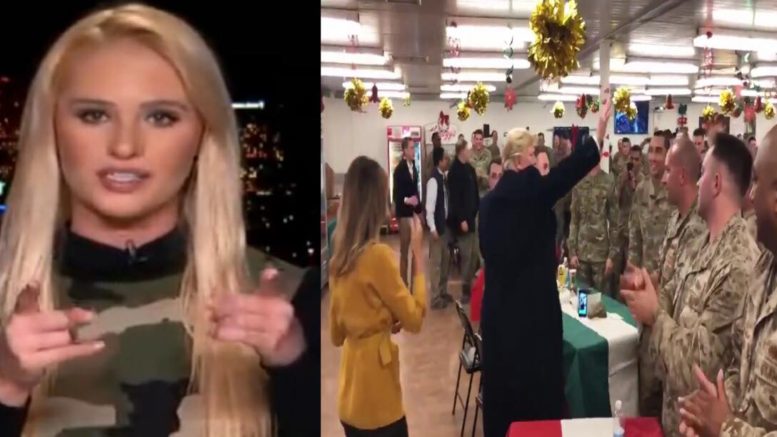 Host of Fox Nation, Tomi Lahren joined Fox and Friends Friday morning where she weighed in on President Trump’s trip overseas as he visited troops in Iraq during Christmas.

The President and First Lady made their first visit to a combat zone surprising troops the day after Christmas. During the visit to Al Asad Air Base, the President autographed some MAGA hats that troops brought with them to the event. (Video Below)

During her interview, a clip was played from CNN where Jim Acosta asked in reference to President Trump signing MAGA hats, “Does this run the risk of the President facing some accusations that he’s turning [his trip] into a campaign stop?”

(Related Article: Trump Blasts Network For ‘Going Wild’ After Signing MAGA Hats: ‘Can You Imagine Me Saying NO?’)

Tomi responded to the clip of CNN’s and the media having a meltdown, and she immediately declared, “The Democrats and those on the left hate the fact that our Armed Forces love this President!”

“It’s actually interesting that it takes the President traveling to Iraq to visit the troops, to get them to care about the troops or talk about the military. But at the end of the day, they can squawk all they want to. The troops love this President for a reason, and he supports them every single day of the year, not just when he goes over for Christmas, unlike the previous President who just used them for a photo op. So, at the end of the day, they know who has their back, and that’s President Donald Trump.” She explained. (Video Below)

When asked if they [democrats and media] were surprised to see that how much the military loves the President, Tomi responded, “Well, if they paid more attention to the military, they would know exactly why the troops love President Trump. He stands up for them day in and day out, he appreciates them.”

Tomi added that President Trump respects their mission, he respects that they put their lives on the line, and the President is going to make sure they’re doing it to put America first and American families first.

“They know that with this President and that’s why they love him, but the left will never understand that, because they can’t see through their blinders, and they never will.” She added. (Video Below)

(Related Article: Don Jr. Destroys MSM’s MAGA Merch Outrage With A Clinton Conundrum: ‘How Many I’m With Her Hats Are In Iraq?’)