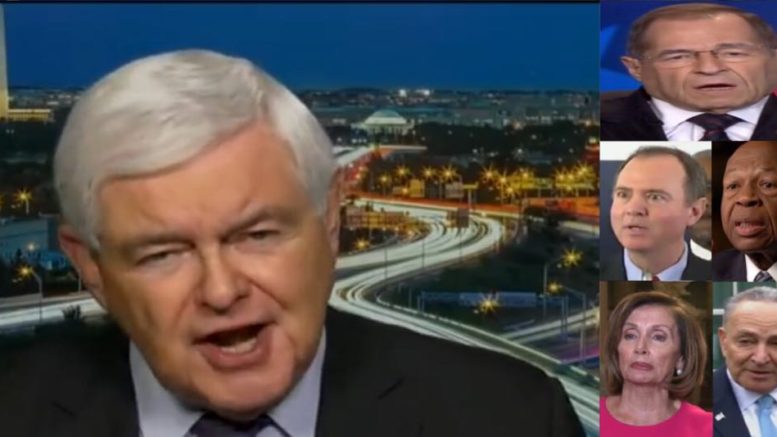 Former Speaker of the House, Newt Gingrich, joined host Sean Hannity on Fox News Wednesday night where he weighed in on Speaker Nancy Pelosi (D-CA) and the vicious attacks from Democrats.

Gingrich, further blasted the left for allowing anti-semitic rhetoric to continue without discipline. (Video Below)

Newt Gingrich began by explaining how strong the forces of the left are now and suggested that there is “deep anti- semitic” and “deep anti- Israeli” bias on the left.

“There are a lot of people on the left who would be very happy if Israel disappeared tomorrow, and who feel 100 percent on the side of Hamas, even while it’s firing rockets at Israeli cities. So, what I think we’ve seen over the last 30 years is a growth in the anti- semitic behavior here on college campuses and a growing willingness by some Democratic politicians to be very openly very anti-semitic and anti-Israel.” Newt said.

(Related: Hannity Exposes Why Nancy Pelosi Is Not Taking A Stand Against Omar: ‘Pelosi Is Terrified Of Being Overthrown’)

He continued, “And, I think the second thing is that a lot of the younger militant members, whether they’re anti-Israel or not, they are deeply opposed to Nancy Pelosi trying to exercise any discipline at all.” (Video Below)

After Hannity declared that Nancy Pelosi is not the Speaker of the House anymore, Newt suggested the she is “losing control of the House.”

“They may be forced in a desperation move to change the House rules to block Republicans from offering anything, which i think would lead to chaos, but she can’t get her party to stay together.” Gingrich said. (Video Below)

Newt also weighed in on the Democrats expanding their investigations into President Trump calling it the most  “vicious character assassination” on a Commander in Chief since the Civil War.

“They’re basically saying, ‘If you worked for Donald Trump as a private citizen, we’re going to try to destroy you. We’re going to make you hire lawyers, we’re going to make you go through public humiliation’. I mean, these are normal, everyday folks, who are not in the political arena, they’re getting called in front of some of these committees, and the most radical, vicious, nasty liberal Democrats are going to feel like they have a right to beat them up, to humiliate them, to lecture them.” He said.

Gingrich pointed out that Rep. Jerry Nadler (D-NY) was being hateful in his actions.

“[Quentin] Tarantino wrote ‘The Hateful Six’ [sic] — he could have written ‘The Hateful Eight’ for the Democratic Committee Chairmen and made a movie out of it,” Gingrich said. “We have never seen, not since the Civil War, the kind of deliberate, vicious character assassination.” Per Fox News.

President Trump took to Twitter Tuesday, calling Nadler’s requests harassment. “Now that they realize the only Collusion with Russia was done by Crooked Hillary Clinton & the Democrats, Nadler, Schiff and the Dem heads of the Committees have gone stone cold CRAZY. 81 letter sent to innocent people to harass them. They won’t get ANYTHING done for our Country!” He wrote. (Video Below)

Related: Gowdy Unveils The Chief Motive Behind Nadler & Schiff’s Trump Probe: ‘This Is All About 2020’