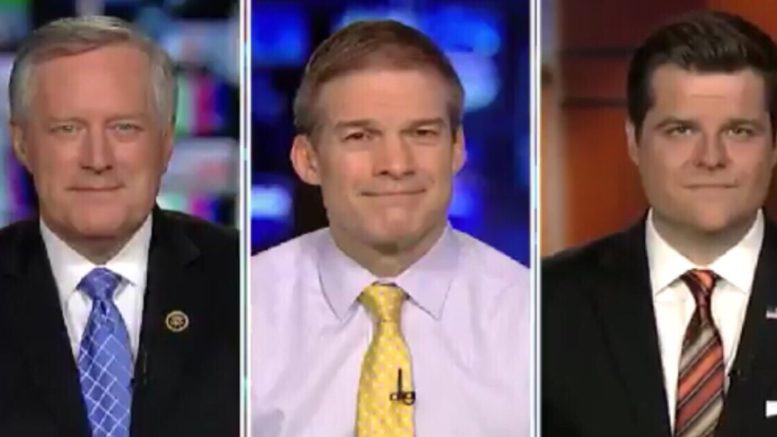 The “three key players who are fighting to protect America each and every day,” discussed what border security means for Americans and dished on lunch with the President. (Video below.)

The three House members tell what happened during the lunch with President on Border Security.

Judge Pirro began by thanking the three Wall supporters and asked about their lunch with the President on border security. Gaetz said. “the President made it very clear to all of us and he’s made it clear to the Country that he is not going take a bad deal from the Democrats.”

Jim Jordan replied, “Well, here’s what I know. One week ago, Nancy Pelosi sat in the Oval office and told the President of the United States that there weren’t the votes in the House.”

Jordan pointed out that Pelosi was simply WRONG. He said, “Two days ago we passed a Bill out of the United States House of Representatives, 217 to 185. A strong win for the President and strong win for the Country. (Video below.)

The Judge interrupts the program to thank the three “movers and shakers” for passing the Bill in the House and onto  the Senate.

In ending, Jordan said, “So, I don’t know whether they should have gone home or not. All I know is that the momentum is on our side because the American people want a secure border.”

Meadows talked about how much “horse trading” will go on in the Senate. Meadows said, “What it’s really going to take is for the Democrats to quit saying that they are for border security when they don’t want any funding for The Wall. You can’t be for one and suggest that you are for a secure America when you are wanting zero funding,” for the the Wall.

Gaetz addressed the community safety issues with gangs, drug and human trafficking and terrorism. He said, “when we don’t build a Wall, it’s like we hang an ‘open for business sign’ for every Cartel and Coyote who would want to destablize our border and bring harm to American families.” Furthermore, he said, “it’s a fight worth having for American families.” (Video below.)

Watch the video below as the Dynamic Trio interview with the Judge:

Part 1 of my interview with three key players who are fighting to protect Americas each and every day. @RepMarkMeadows , @Jim_Jordan and @RepMattGaetz all joined me on ‘Justice’. pic.twitter.com/h1UfgUAIOs

Malkin Weighs In On How Paramount Trump’s Nation Address Is: ‘Americans Elected Him To Make This The Issue’

Rand Paul Points Out How To Get Wall Funding & Praises Trump: ‘I’m Very Proud Of The President’