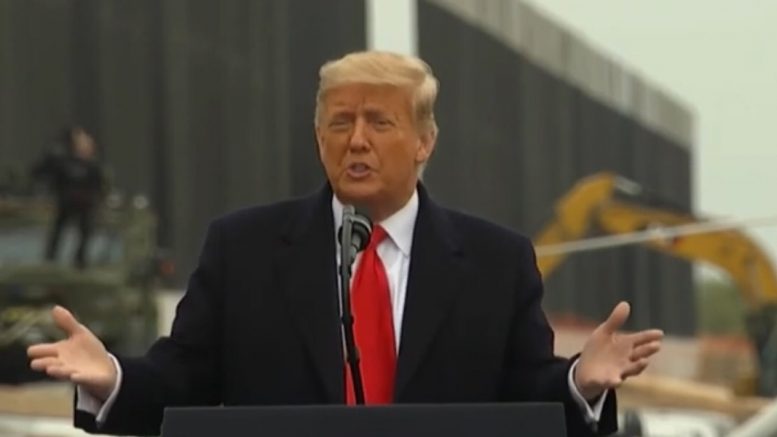 The 45th Commander in Chief issued a statement Tuesday via email from his “Save America” PAC, announcing that he will be visiting “our Nation’s decimated Southern Border” at the end of the month.

Former President Donald Trump said in his statement that he has “accepted the invitation of Texas Governor Greg Abbott to join him on an official visit” to the U.S./Mexico border.

I have accepted the invitation of Texas Governor Greg Abbott to join him on an official visit to our Nation’s decimated Southern Border on Wednesday, June 30, 2021.

The Biden Administration inherited from me the strongest, safest, and most secure border in U.S history and in mere weeks they turned it into the single worst border crisis in U.S history. It’s an unmitigated disaster zone.

We went from detain-and-remove to catch-and-release. We went from having border security that was the envy of the world to a lawless border that is now pitied around the world. Biden and Harris have handed control of our border over to cartels, criminals, and coyotes. Drug dealers, MS-13 gang members, human smugglers, sex traffickers, and the criminal elements of the world now have free reign.

Hospitals and schools are getting crushed and public health is being sacrificed all in service of a radical left anti-borders agenda. Our brave border agents and courageous ICE officers have been illegally stopped from doing their jobs. Our Nation is now one giant sanctuary city where even dangerous criminals are being cut loose and set free inside the U.S interior on a daily basis. Continued Below

If this weren’t bad enough, Biden and Harris won’t even tour the scenes of the wreckage they created, or come down and visit with the Border Patrol and ICE heroes risking their lives to defend our Nation at a time when the White House is doing everything it can to make their job totally impossible.

What Biden and Harris have done, and are continuing to do on our border, is a grave and willful dereliction of duty.

My visit will hopefully shine a spotlight on these crimes against our Nation—and show the incredible people of ICE and Border Patrol that they have our unshakeable support. Media credentialing information will be provided at a later date. Continued Below

Meanwhile, Texas Governor Greg Abbott (R) said he will be announcing plans soon to finish building The Wall in Texas.

Later this week, I will unveil our plans to build a border wall.

The Lone Star State will do what Biden REFUSES to do — protect our citizens along the southern border. pic.twitter.com/qQ7vQTDWAI

Governor Abbott also revealed that he “signed a Resolution asserting Texas sovereignty under the 10th Amendment over all powers not granted to the federal government by the US Constitution.”

I just signed a Resolution asserting Texas sovereignty under the 10th Amendment over all powers not granted to the federal government by the US Constitution.

The Resolution officially notifies the President & Congress to cease acts of encroaching upon the powers of states. 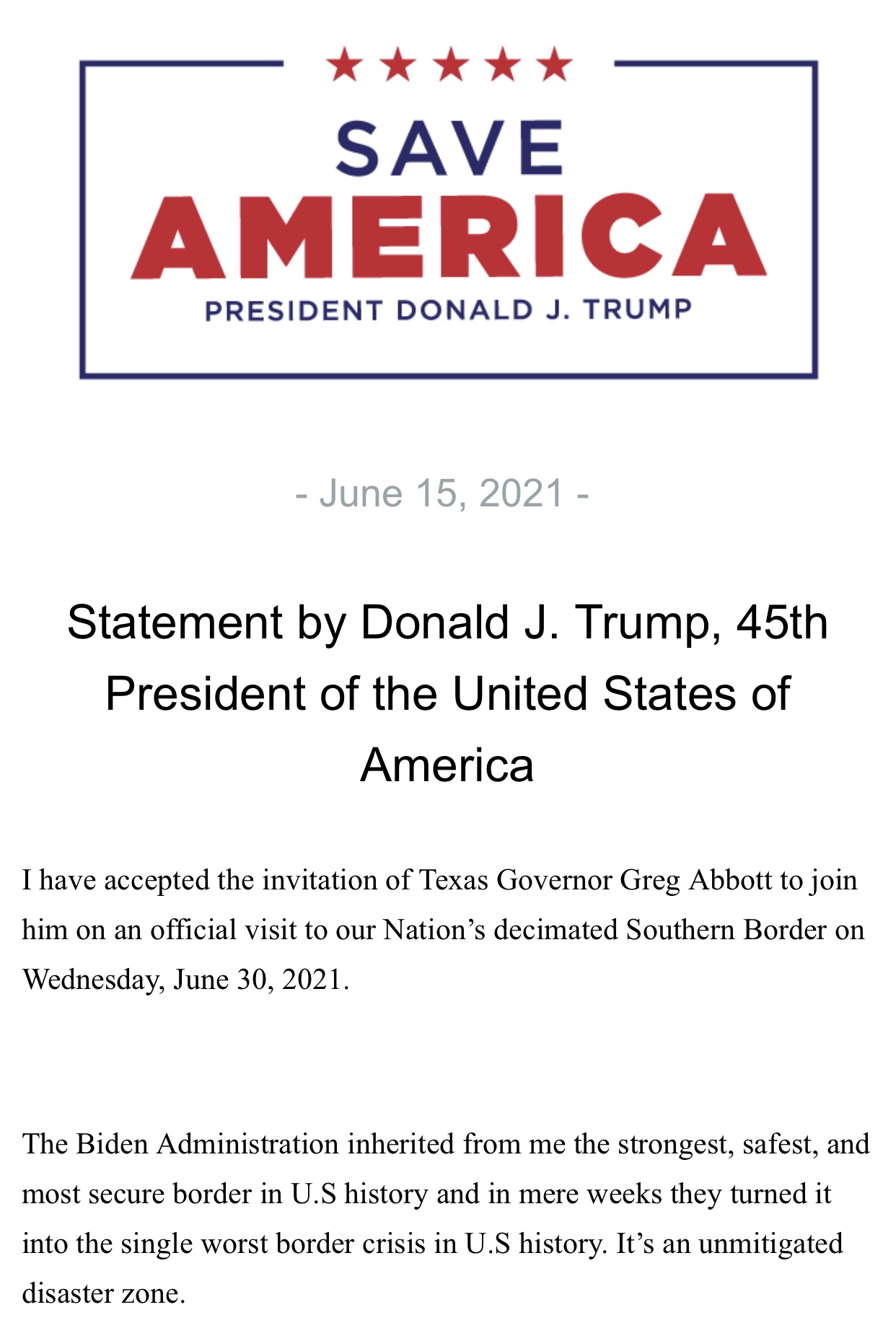 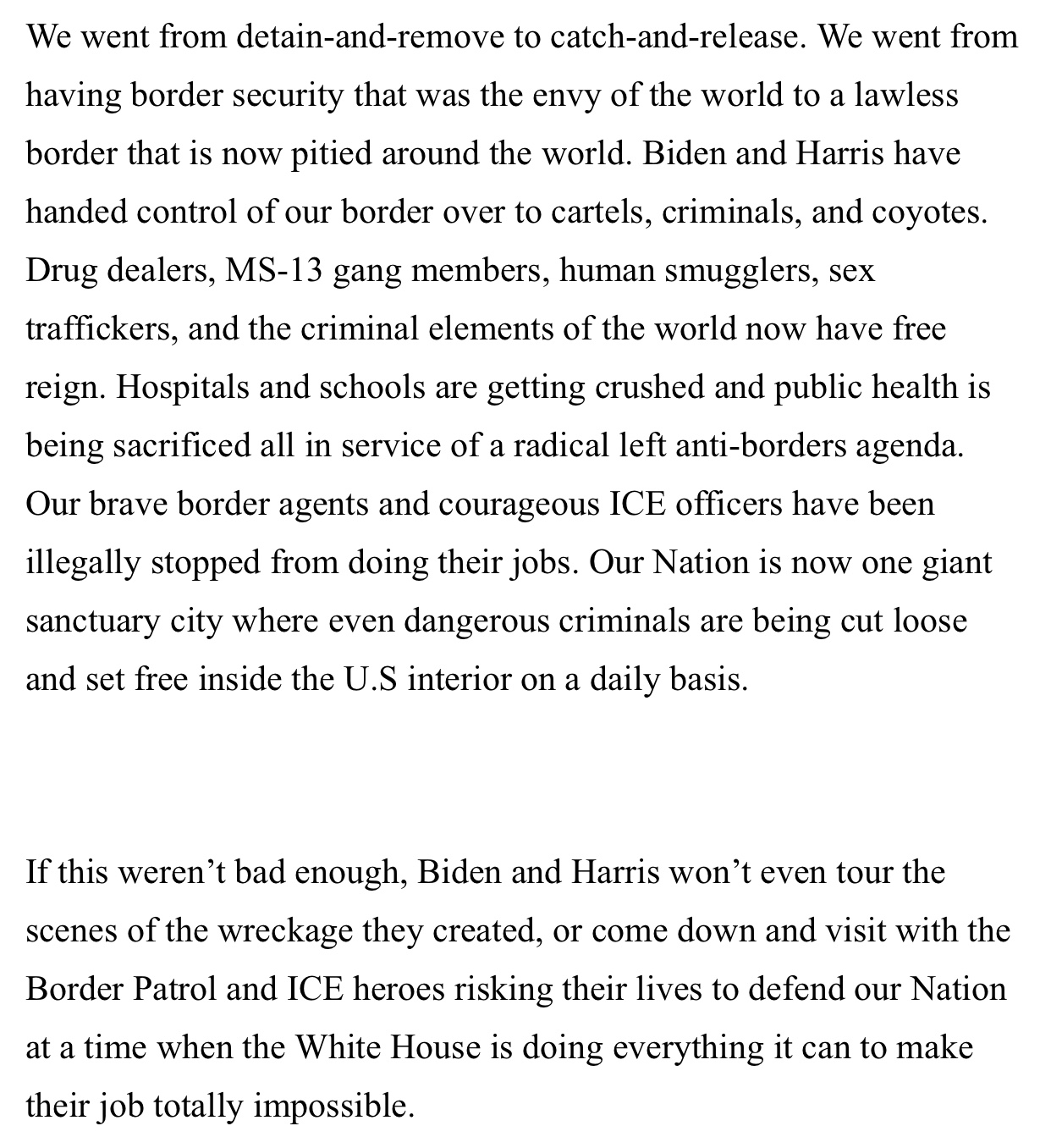 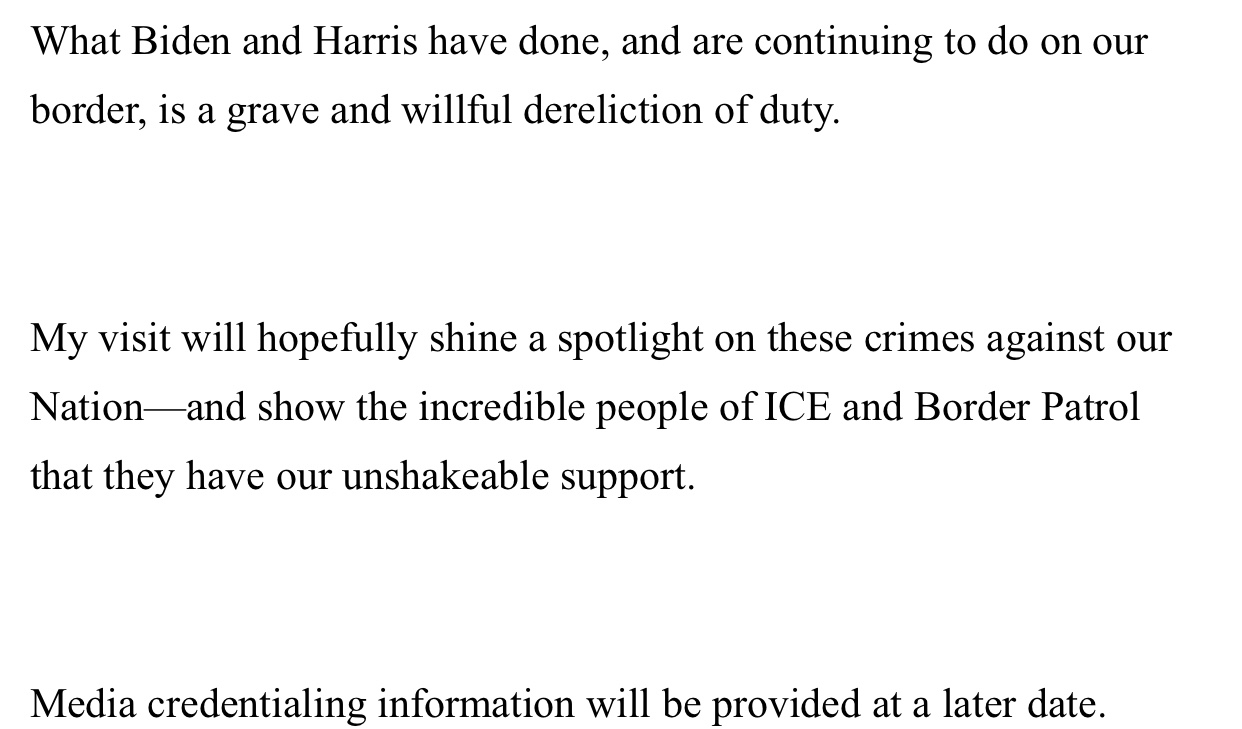 President Trump’s previous visit to the US-Mexico border wall was near Alamo, Texas on Jan 12, 2021:

(Related: Biden Gets Pressed On Trump’s Planned Visit To The Southern Border: “I Don’t Care What The Other Guy Does”)