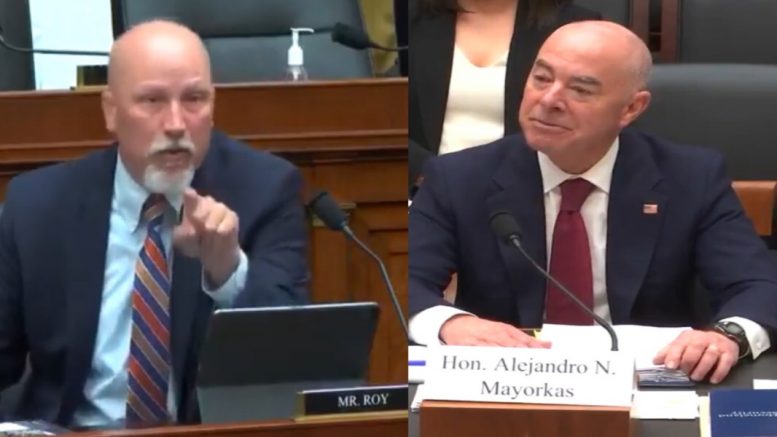 During a hearing yesterday, Department of Homeland Security Secretary Alejandro Mayorkas claimed President Biden has “effectively managed” the southern border of the U.S (managed to turn it into a complete disaster). Mayorkas also naturally blamed the “previous administration” for the problems at the border, Doug P. at Twitchy reported.

Rep. Chip Roy (R-TX) on Thursday called out Mayorkas’ appeared gaslighting and talking points and accused his agency of “releasing people on purpose in order to flood the zone and make sure that more people can come to the United States”.

“The Secure Fence Act of 2006 says what? — That ‘The Secretary of Homeland Security shall take all actions the Secretary determines necessary and appropriate to achieve and maintain operational control over the entire international land and maritime borders of the United States'”, Rep. Chip Roy told DHS Sec. Mayorkas.

“Will you testify under oath right now? Do you have operational control, yes or no?” he asked Mayorkas.

Mayorkas claimed, “Yes, we do”.

Mayorkas deflected, invoking the previous administration, which prompted Rep. Roy to tell the DHS secretary that the former administration would have said, “We had some sort of control of the border”, adding, “But the fact is, we currently have people flowing across the border bringing dangerous narcotics and dangerous members of terrorists, which your own agency sent a letter to my office after 18 months … saying there are 42 people on the terrorist watchlist that are in the United States”.’

“… The fact of the matter is our laws say [illegals] should be detained, and your agency is releasing people on purpose in order to flood the zone and make sure that more people can come to the United States,” he told Mayorkas. Video Below

Before concluding his remarks with the DHS secretary, Rep. Roy held of pictures of “dead migrants” found near the southern border in Texas.

He also held up other pictures and faces of “dead Americans” who died “because of fentanyl” that is “pouring in our country”.

"Your agency is releasing people on purpose in order to flood the zone & make sure that more people can come to the United States." pic.twitter.com/kdLIxChYKD

42 illegal immigrants were caught trying to cross our border, but Mayorkas was unable to give a direct answer of whether they are in our country to Rep. @Jim_Jordan. pic.twitter.com/cIPYsltpBX

(Related: Jordan Rips Mayorkas for ‘Intentionally, Deliberately…Executing a Plan’ to ‘Overwhelm our Country With Millions & Millions of Illegal Migrants’)