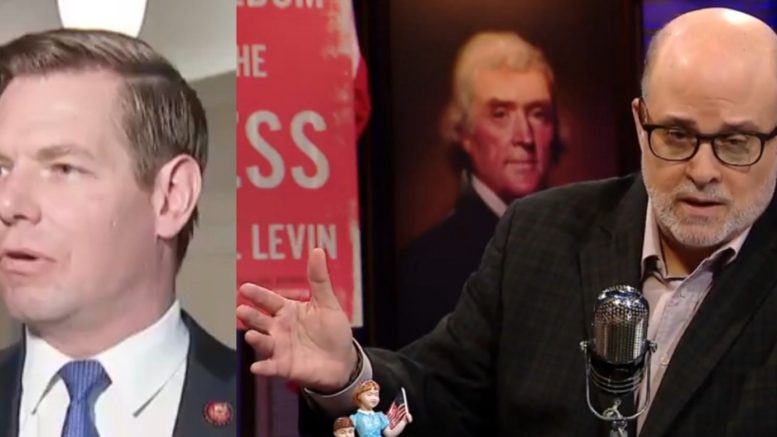 Mark Levin told his audience how he really felt about Democrat Congressman Eric Swalwell during recent commentary of the House impeachment inquiry.

In a video posted to his LevinTV Twitter account, Levin could be seen watching clips of Congressmen giving remarks on the secret impeachment inquiry hearings, and suddenly, he paused the video when Rep. Swalwell popped up on the screen.

“Why is this guy on TV all the time?” Levin questioned while Swalwell’s still-image lingered on the screen next to him.

“He ran for President for about twelve seconds. He’s a complete moron. Uh, his 1943 haircut there. I know, I should talk,” Levin said while sarcastically patting his head.

“But still, this guy Swalwell, he is an utter and complete hack,” he declared before the video switched to a promo clip.

For an added touch, Levin captioned his tweet of the video, “Why is He Here? Did Eric Swalwell get lost? What is he doing here?” Video Below

Why Is He Here?

Did Eric Swalwell get lost? What is he doing here?

In a recent interview with CNN, Swalwell tried justifying closed door impeachment hearings, and claims they have to happen in secret so witnesses don’t “manufacture alibis.” You can read more on that by CLICKING HERE.

Swalwell also tried knocking down the notion that Ukraine may have interfered in the 2016 election, which he now labels as a “conspiracy theory” despite a detailed report by the left-leaning source Politico.

In ending, here is a tweet from Dan Bongino reacting to Swalwell calling the idea of Ukrainian interference a “conspiracy theory”: