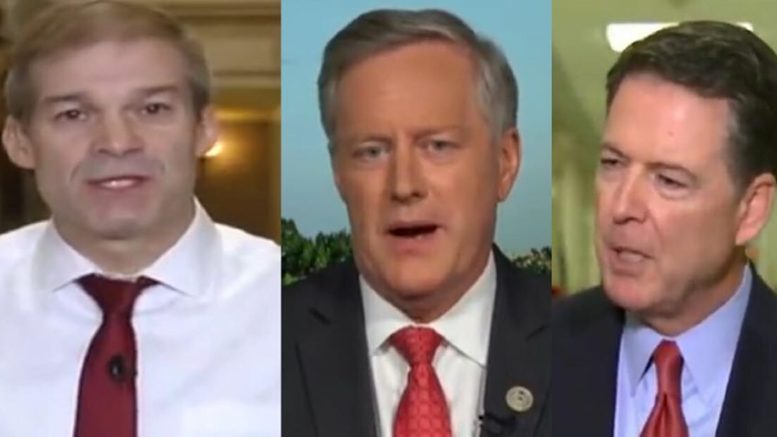 A transcript of Comey’s testimony was released publicly Tuesday after the five-hour interview was conducted by the House Oversight and Judiciary Committees.

The House released the testimony transcript with James Comey, the day after he mocked congressional Republicans and Fox News when he emerged from the closed-door interview on Monday.

The 173-page transcript, which documented congressional Republicans’ second hearing with Comey this month, additionally included Comey’s explanation of why he broke normal protocol by sending two FBI agents into the White House to interview Flynn in January 2017, without involving or notifying White House lawyers, according to Fox News.

(Related Article: Herridge Asks Comey If He’s To Blame For FBI’s Reputation, His Response Is Priceless)

Leaving the interview Monday, Comey accused Republicans of failing to stand up to President Donald Trump’s attacks on the FBI.  He told reporters, “People who know better, including Republican members of this body, have to have the courage to stand up and speak the truth, not be cowed by mean tweets or fear of their base. There is a truth and they’re not telling it. Their silence is shameful.” (Continued Below)

Republicans had a much different view of the former director’s testimony and his public comments. Rep. Mark Meadows (R-NC) criticized Comey for saying he bore no responsibility for the FBI’s damaged reputation.

Meadows wrote on twitter Monday, “All you need to know about Dir. Comey’s sanctimonious lecture to Americans today is the fact he takes no responsibility for the erosion of trust in the FBI and DOJ,” “The rampant process abuses and breaches of protocol occurred on his watch. He refuses to be transparent about it.”

After the transcript was released Tuesday, Meadows further wrote, “I asked Director Comey about who paid for the dossier. His response: 1) Republicans paid for it — (Republicans did not pay for it) 2) “Who cares?” Yes, this is an FBI Director apparently not caring to know who paid for information used to surveil Americans with a FISA warrant.”(Continued Below)

Jordan wrote, “1/24/17: FBI interviews Gen. Flynn. 3 days later: Comey has dinner w/ the President. They discuss Flynn BUT Comey doesn’t tell @POTUS that Flynn lied to VP and FBI. Why? If the National Security Advisor is misleading the VP and FBI, shouldn’t the Commander in Chief be told?”

In response to Meadows and Jordan on Comey not caring:

At this point, what difference does it make…
Why do we tolerate this sort of response from our civil servants? pic.twitter.com/G25VFDtFrN