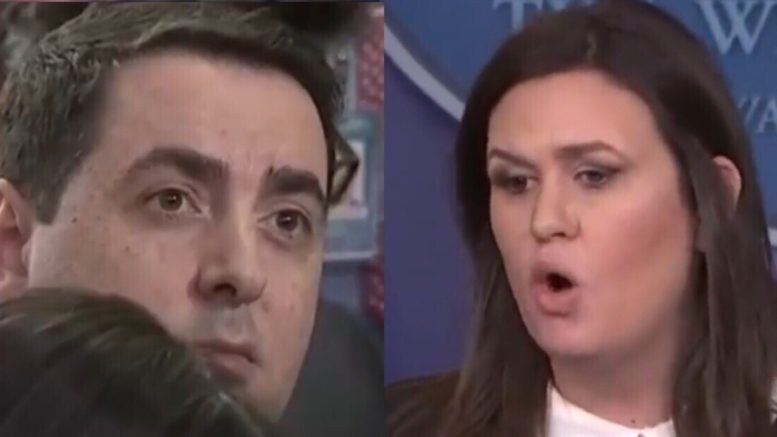 Portnoy tries to have Sarah walk back a comment. Sarah told him exactly why she would not...backed up with facts. Photo credit to The Freedom Times compilation with screen shots.

Michael Flynn was in front of Judge Emmet Sullivan today for his sentencing for lying to the FBI in 2016.

And in the Court room, reporters gathered then asked Sarah Huckabee Sanders to clarify during the White House presser. (VIDEO BELOW.)

The gaggle of reporters were no match for Sarah.

Steven Portnoy, CBS News White House correspondent said, “I was in the Court House the last hour. And Judge Emmet Sullivan – basically – said that he was disgusted by Michael Flynn’s crimes.”

Portnoy continued, “that Flynn said that he knew it was illegal to lie to the FBI and he was ready to accept responsibility. This was all before agreeing to a later sentencing. Given that, are you in a position now or would you like to revisit your comments earlier that the FBI ambushed Flynn?”

Emphatically, Sarah said a resounding, “no,” to Portnoy.  She said, “We still firmly believe. Look. The things that may have taken place – again – that’s for the Judge to make that determination whether he engaged in something inappropriate.”

“What we do know that was inappropriate,” Sarah said as she lifted her head and smiled, “by the own self-admittance of James Comey – is that the FBI broke standard protocol, in a the way, that they came in and ambushed General Flynn.” (VIDEO BELOW.)

General Flynn’s sentencing has been delayed until March 13th.

“Those are facts,” Sarah ended, “and certainly there may be other issues but we don’t have any reason to walk that back.”

The Hill reported, that Flynn’s team “requested to postpone his sentencing for lying to FBI agents about his contacts with a Russian ambassador until his cooperation with federal prosecutors is fully complete,” and it is set for March 13th. (VIDEO BELOW.)

WATCH as Sarah smacks down the CBS reporter on walking back her comment that Flynn was ambushed.