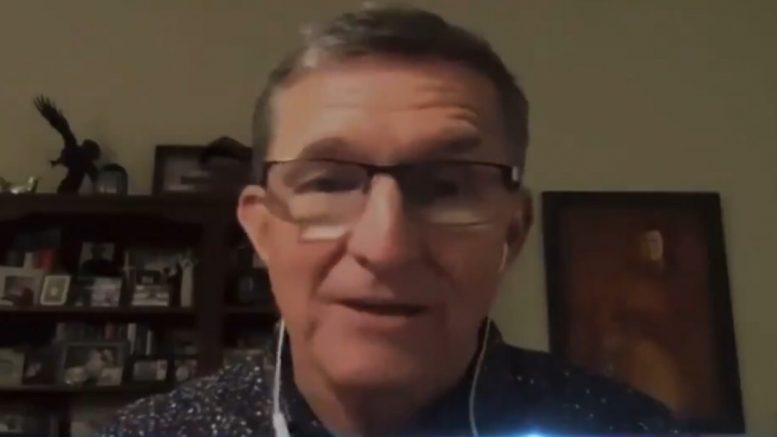 During a Wednesday interview on “Flashpoint”, Lt. General Michael Flynn weighed in on the Maricopa County forensic audit being conducted in Arizona over the 2020 November general election and predicted that multiple battleground states will follow suit.

Most recently, a delegation from Pennsylvania visited Arizona to tour the Maricopa County audit. General Flynn said the lawmakers who visited AZ will most likely “take the initiative on to do a forensic audit in Pennsylvania.”

“Wisconsin, if I’m not mistaken, … delegation is supposed to be down in Maricopa, and all of the things that we are learning. … My assessment is that in the next probably in 3 to 4 weeks, maybe less, but certainly, 3 to 4 weeks, we’re gonna see out of Arizona and out of a couple other places, probably Georgia– we’re gonna see some real bombshells, to use an old term there that’s probably been overused, Mr. Flynn predicts.

“But, we’re gonna see some things come out in these audits … that are just gonna shock everybody. And frankly, everybody that’s been paying attention and watching this thing, it won’t be shocking. It won’t be surprising. People are gonna go, ‘See, we’ve been saying this all along,'” he said.

“So all of the media that have been talking about these conspiracies theorist people like me and Patrick [Byrne] and Sidney [Powell] and others who have been out there, Mike Lindell. These aren’t conspiracy theories. These are real things that have happened. The election was clearly misappropriated, stolen. Whatever word you want to use. And now the discovery of the evidence is starting to come to light, and I think we’re gonna see it in droves in a couple of states, not just Maricopa County in Arizona,” General Flynn foresees. Video Below

“If you think this last election in November was done perfectly, you’re nuts. … There is no way in the world that we have a legitimate leader in the president, based on the outcome of 3 November election. No way,” he expressed. Video Below

Full interview begins at the 1:03:00 mark into the video:

(Related: General Michael Flynn: “Everything Is a Distraction to What Happened on the 3rd of November”)