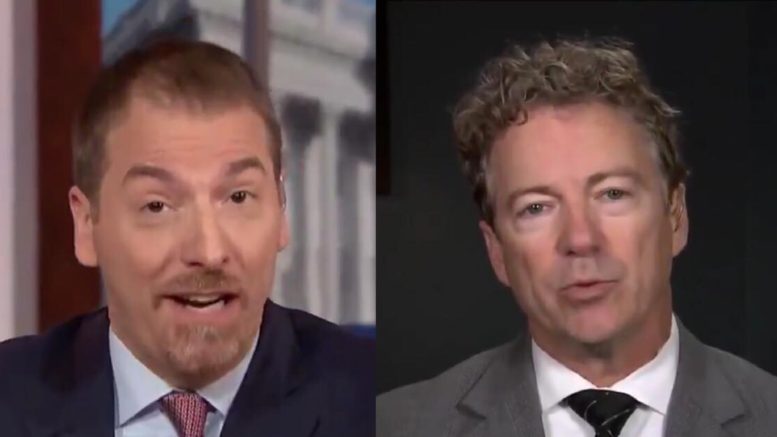 The Kentucky Senator didn’t fall for the anti-Trump bait, and he threw it back at Chuck Todd. (Video Below)

During the segment on Sunday, Senator Rand Paul said he does not think then-candidate Donald Trump pursuing a business deal to build a Trump Tower in Moscow was illegal.

Just another day in Russia conspiracy land, Chuck Todd was ready with his propaganda talking points and asked Sen. Rand Paul, “Let me ask you about the allegation that Michael Cohen had circulated his false testimony to Congress in advance, so people in and around the President, perhaps his lawyers, perhaps him, knew in advance that Michael Cohen was going to lie to Congress. That’s something…..”

Rand Paul gave Chuck Todd a look of “I’m not playing your games,” and he stopped him in his tracks. “About what issue?” Rand asked. (Video Below)

Chuck Todd tried to seem like he was asking a hard question. “About the Trump tower Moscow project. How does that sit with you?” Todd asked.

“Yea…” Rand said sarcastically, as if it was the most ignorant question asked.

“I guess I don’t quite understand it, because I don’t know what’s illegal about trying to build a hotel in Russia.” Rand said, dropping the mic. (Video Below)

Watch the exchange below:

WATCH: Sen. Rand Paul (R-Ky.) reacts to the news of Michael Cohen's false testimony to Congress and its prior circulation. @RandPaul: "I don't know what's illegal about trying to build a hotel in Russia." pic.twitter.com/RPcKo1bGaG