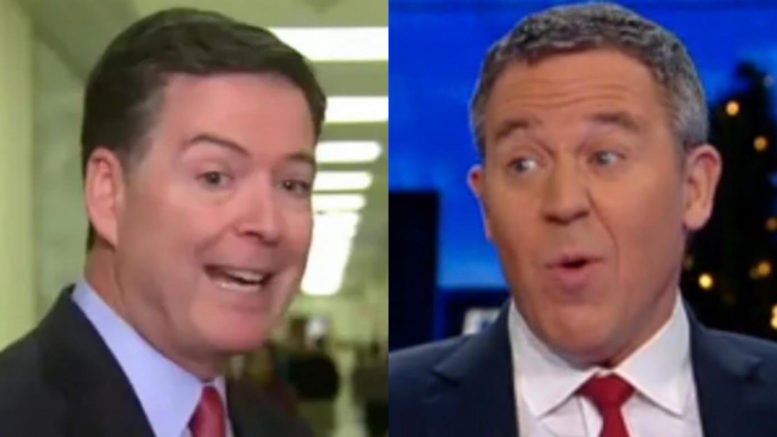 Comey’s left-wing biased comments are beyond anything any American would think an impartial former FBI official would say. Greg Gutfeld of Fox News did not let Comey get away with it. (VIDEO BELOW.)

After Comey’s closed-door congressional testimony on last Monday, he told a reporter, “At some point, someone has to stand up and in the face of fear of Fox News, fear of their base, fear of mean tweets, stand up for the values of this country and not slink away into retirement,” the The Daily Caller reported.

“I find it frustrating to be here answering questions about things that are far less important than the values this country is built upon,” Comey said.

Wait…what? Is Comey referring to the “values” of “hope and change” from the Obama-era that the American people voted out in November of 2016?

Well, Greg Gutfeld from Fox News, had a thing or two to say to Comey about his left-wing comment to the press. (VIDEO BELOW.)

Greg Gufeld tells it like he sees it! This is pure GOLD!

Gutfeld began discussing Comey’s comments at the end of his second testimony. Greg said, “This is a charade of honesty, right? He said he was unable to recall something like 250 times? Before, he always talks about how he’s willing to go there and willing to talk but when he sits down. He says nothing.”

“He’s like the guy who says, ‘sure I’ll come over and help you move.’ But when he gets there – all he does is drink the beer and eat the pizza that you paid for but doesn’t lift a finger,” Gutfeld explained Comey’s behavior at the congressional testimony.

“He keeps talking about how honest he is, but he deals in mean tweets. He deals in platitudes, he deals in attacks. He thinks he’s a boy scout but he’s more like a disgruntled pit bull,” Gutfeld ended. BOOM! To read Comey’s full transcript, click here. (VIDEO BELOW.)

Watch the video below as Comey talks to reporters and Greg Gutfeld slams Comey for his left-wing bias commentary.