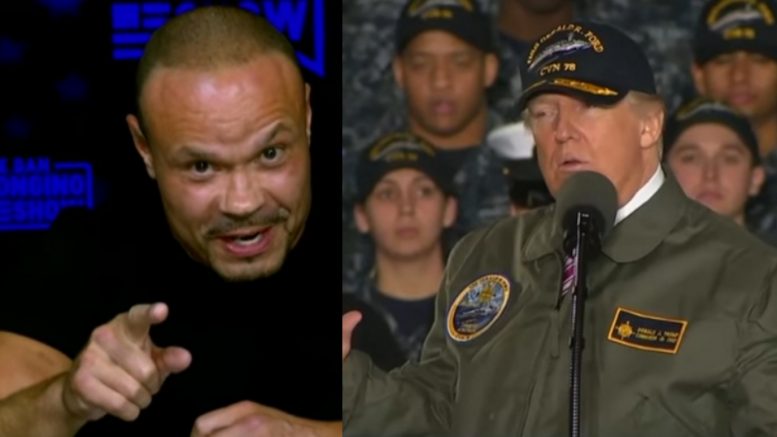 The latest anti-Trump story by The Atlantic is nothing but a “BS story” that is part of a series of “disinformation campaigns” with a goal to “destroy” President Trump, according to political commentator Dan Bongino.

Bongino unleashed a series of tweets that targeted the left-leaning publication’s “hit job” against President Trump that was published on Thursday, and instantly cycled across mainstream news sources and was used by the Biden campaign before it was debunked.

According to the magazine’s report, President Trump canceled a planned 2018 trip to a cemetery in France for American marines who died in World War I because of disdain for the slain soldiers who are buried there. It also alleges that Trump called the deceased soldiers “losers” and “suckers” when cancelling his trip, as per the article’s “anonymous sources”.

A White House official, however, released a redacted email proving that a “bad weather call” was the reason the Commander in Chief could not attend the Aisne-Marne American Cemetery in 2018, which debunked The Atlantic’s story.

Other current and former White House officials as well as the President Trump and First Lady Melania Trump have since denied the allegations and blasted the publication for spreading false information.

Upon learning of the details laid out in The Atlantic’s report, Bongino tweeted, “I’ve spoken privately with the President many times. I have NEVER heard him express anything other than extreme admiration for the bravery and heroism of our military and law enforcement personnel. Rebuilding the military was always priority one for him. That story is a hit job.”

Moments later, he speculated that the so-called anonymous sources in the article are most likely “anti-Trump Department of Defense personnel.

“Make no mistake. This latest disinformation op regarding Trump & the military has the fingerprints of a small group of former anti-Trump DoD personnel ALL OVER IT,” Bongino suggested. “This group isn’t hiding their use of sophisticated disinformation campaigns to destroy Trump. Look it up,it’s public.”

Bongino predicted that the “bullshit story” will “blow up” in the faces of those whose goal was to destroy Trump.

“This bullshit story about Trump is going to blow up on the disinformation specialists who spread it,” he tweeted. “As the story collapses (I have REAL sources telling me it’s 100% BS) it’ll highlight how awful the Obama/Biden era was for the military & contrast it w/the turnaround under Trump.”

He then followed up by laying down a special message to the “media hacks” who are helping to spread The Atlantic’s story.

“Dear Media Hacks,” Bongino tweeted. “You’re about to entirely annihilate any shred of credibility you thought you had left with this delusional anti-Trump story about the military. Sources, WHO WERE THERE, are telling me it’s absolute BS. Are you really sure you want to die on this hill?”

“People telling you that the cancellation of the cemetery visit was ANYTHING other than a weather call are absolutely lying to you. Sources who were there have confirmed to me that it was a straight weather call,” Bongino tweeted on Satruday morning. “This story is click-bait BS.”

At one point of Bongino’s tweet storm, Donald Trump Jr. chimed in. We leave you with his reply:

They hate @realDonaldTrump because he wants to end the endless wars that have made their friends really rich.
Those same people can’t even tell you why we are there but board seats at “War Inc.” pay almost as well as the Hunter Biden specials! @dbongino https://t.co/fKpdIFwN6x