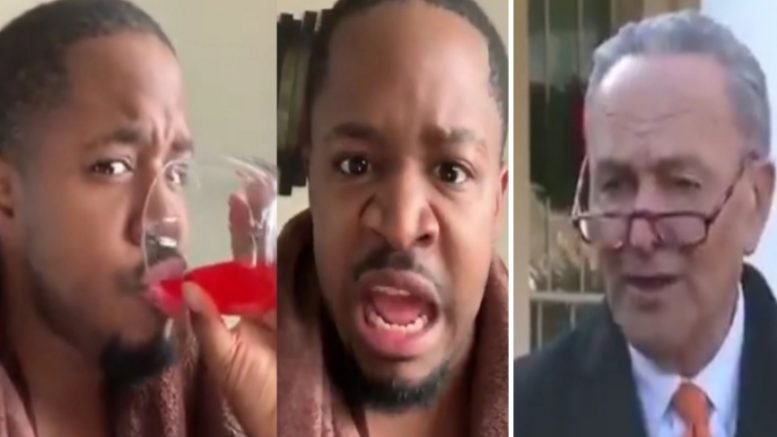 Comedian Terrence Williams has become quite the icon for Trump supporters on social media as he often posts hilarious, yet bold rebuttal videos to comments made by popular figures of the left.

On Tuesday, Senate Majority Leader Chuck Schumer fell victim to Williams in what was one of the comedian’s sharpest counter-strikes to date. Video Below

Williams played a segment from Schumer’s press conference after his meeting with President Trump regarding the border wall.

Schumer said of President Trump, “This temper tantrum he seems to throw will not get him his wall and will hurt a lot of people cause he will cause a shut down.”

Williams, who is seen taking a swig of his red power drink, immediately slams Schumer’s remark.

Williams fires back saying Schumer is “so right” that Trump is throwing a temper tantrum. And he justifies to Schumer that Trump’s tantrum is because “ya’ll don’t know nothin’ about border security, and we are tired of people coming over here illegally!”

In a stern tone, he adds, “My President can huff and puff like the Big Bad Wolf all he want to because we need to build that wall!” Williams said, “The people want the wall! That’s why he’s throwing a temper tantrum…It’s for the good of the country.”

And as far as Schumer and Democrats go, Williams finishes with, “You and Nancy Pelosi, ya’ll make me sick!” He directed them to “cut out the bull crap” and “give him the money for the wall!” Video Below

CRYING CHUCK SCHUMER said Trump is throwing a Temper Tantrum over the Wall.

RETWEET if you are sick of these Democrats putting America Last like Chuck and Nancy.#BorderWall #Schumer #Pelosi #TrumpShutdown pic.twitter.com/uKi3WSOQRl