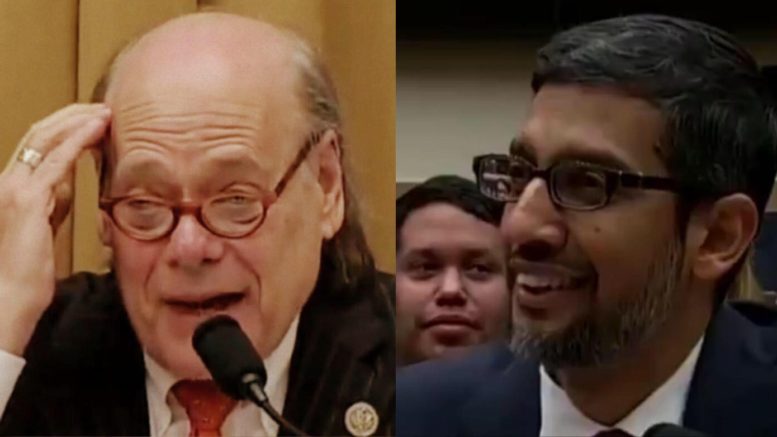 Google CEO Sundar Pichai testified before the House Judiciary Committee on Tuesday amid allegations of anti-conservative bias and privacy violations on the tech giant platform.

Pichai’s prepared remarks that were released on Monday, said the tech giant is not a haven for political bias. (Video Below)

During the hearing on Tuesday, Rep. Steve Cohen (D-TN), asked Google to look into its search engine’s “overuse” of conservative news outlets.

Cohen’s remarks centered on his experience Googling himself following cable news appearances and finding stories about his appearances on outlets such as The Daily Caller and Breitbart.

(Related Article: After Cohen Calls For A Military Coup On Trump, James Woods Slaps The Crooked Out Of Him)

Cohen told Pichai, “This weekend I was on MSNBC four times, yet the first thing that comes up is the Daily Caller, not exactly a liberal, but I guess a well-known, group. Then it’s Roll Call, then Breitbart News, then the Memphis Business Journal, then Breitbart. So, it looks like you are overly using conservative news organizations on your news. I’d like you to look into overuse of conservative news organizations to put on liberal people’s news on Google, and if you’d let me know about that I’d appreciate it.” (Video Below)

It appears democrats don’t like it when they experience what conservatives go through on a daily basis. Maybe Steve Cohen couldn’t find “liberal” articles about himself because a particle source he may have been hoping to find didn’t write about him, while conservative leaning sources did. (Video Below)

Watch as Cohen asks the Google CEO to look into “the over-use of conservative news organizations” and then the room starts laughing:

.@RepCohen asks Google CEO to look into “the over-use of conservative news organizations,” citing fact that when people search for his MSNBC appearances, it often takes them to Daily Caller articles. pic.twitter.com/kmEXYqhq9x