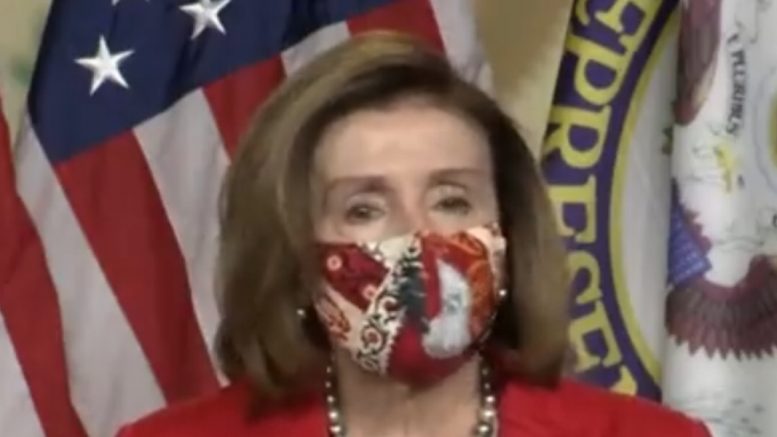 California Democratic House Speaker Nancy Pelosi’s house has been reportedly vandalized in the wake of the the government negotiating stimulus relief funds to Americans as a result of the coronavirus pandemic.

Pelosi’s San Francisco home was vandalized overnight … most of the damage was done to her garage door and driveway. The perp or perps spray-painted “Cancel Rent!” and “We Want Everything” in big black letters on her door … and there’s also a nod to the failed $2,000 government stimulus checks, according to TMZ.

A photo emerged on Twitter, displaying the vandalization at Pelosi’s house in San Francisco. A pig’s head and what appeared to be fake blood were also placed in front of her garage.

Law enforcement sources told TMZ … San Fran cops responded to a vandalism call at Pelosi’s home around 3 AM. We’re told a police report was taken, but it’s unclear if they have any suspects.

John Dennis, who in the November election battled to take Pelosi’s House seat in California’s 12th congressional district, responded to the attack on her home, tweeting that the “violent left” was responsible.

“Lunatics leave pigs head & graffiti at Nancy Pelosi’s house. Appalling,” he wrote, while also accusing the news media of “ignoring” the incident. “I took this picture just 5 minutes ago. They are literally covering it up. Dems like Pelosi will learn sooner or later: you cannot appease the violent left.” Continued Below

Appalling.@FogCityMidge is right. News is ignoring.

I took this picture just 5 minutes ago. They are literally covering it up.

Dems like Pelosi will learn sooner or later: you cannot appease the violent left. https://t.co/Ohih0zVTpO pic.twitter.com/0JOxzj9KA4

(Related: Mike Huckabee Reacts As Protest Erupts Outside Pelosi’s Home: “She Should Go Out & Serve Them Some Of That Fine Ice Cream She Keeps”)